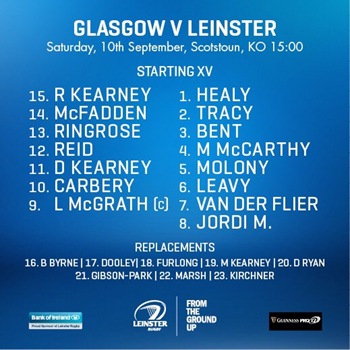 It was a week of very different coaching appointments in the world of Leinster, Ireland & Lions rugby.

On an “element of surprise” scale of 0 to 10, going from “tell me something I don’t know” to “WT actual F???”, I think it’s safe to say the two announcements over the past few days can be put at opposite ends, with no prizes for guessing which goes where!

When it comes to Warren Gatland...well, no doubt anything an Irish fan says against his appointment will somehow be linked to the “BOD thing”...it’s an easy enough association to make.  Personally, I think my attitude towards the Lions concept is becoming similar to that of a certain element of Welsh fans towards the Pro12.  For what’s meant to be a joint venture, you get the feeling that some nationalities are considered more “equal” than others, so that perception is bound to affect my levels of interest.  Still - when the tour itself comes around, I’ll be cheering for the Lions, and in the meantime, I’ll be speculating as to my starting XV.  But maybe not just yet.

Now, to Stuart Lancaster.  It really threw me.  Most big press releases leave you with an instantaneous sense of where you should stand on the information...this one was not one of those.  For the negative side of it I quote Mrs P, who likes rugby but only really pays attention when it’s Ireland, not so much when it’s the provinces.  I texted her the news and she replied with “But I thought he was crap?”

Given how England were perennial Six Nations bridesmaids under his watch with his successor then becoming an instant bride, on top of the Omnishambles Supreme that was the home World Cup campaign,  it is far from unjustified to have a reaction such as hers, and I’m sure there are many that felt the same without actually saying so.

However...we must take into account two things : first, that as an actual coach his credentials are sound, and I know of nobody from the rugby fraternity who suggests otherwise.  He comes to Leinster in a senior role, not a head one, and that could suit both him and Leo down to the ground.

The second thing that must be considered is the fact that we had a senior position to fill quickly, in a coaching staff where experience at the highest level was most certainly an issue.  I’m going to lean towards the phrase “beggars can’t be choosers” without actually fully committing because I believe Lancaster to be a far better option than one would settle for.

Overall, I reckon the only thing that would make this a bad move for Leinster would be his not fitting in with the general set-up personality-wise, and all reports suggest he is the kind of guy who would get on with most people.  Even if he doesn’t, he has only been taken on until the end of the season for now so I say we give the new ticket all the support we have to give and let them get on with it.

And we can begin with those levels of support this weekend because I think we’re going to need ‘em!

Last season we were meant to play this fixture a week before our “back-to-back” European series with Toulon only for it to be postponed on account of the Scotstoun pitch being mulchified by torrential rain.  Hopefully there’s no fear of that this season as the Warriors now have an artificial surface much like the one we have at Donnybrook.

Were I to preview this match without knowing anything about the two sides’ first outing, I probably would have concurred with the bookies’ spread of a 6-point Glasgow win.  But while Leinster made rather heavy weather of dispatching Treviso at home, Gregor Townsend’s men absolutely walloped the champions on their own turf.  There’s no escaping this kind of form.

Of course, there is every possibility Leinster could raise their game for the big Sky Sports Saturday afternoon kickoff.  Joey Carbery showed a lot of promise last week and should be on an upward curve.  There are just a few little tweaks here and there to the lineup...Dave Kearney coming on to the wing, James Tracy in at hooker and Jordi Murphy in at number 8 to allow Messrs Leavy & Van Der Flier continue their “Hooper/Pocock” impression.

I am in no doubt that we possess the capability to do all of the above.  But I am also in no doubt as to the capability of the home side to put a lot of points on us down the other end.  So my prediction is going to be a home win by 10-12 points, but while still retaining faith that we can come away with something.

All in all it should be a stern test for the new coaching group but one that should give us a really good sense of where we stand with the Champions Cup kickoff not far around the corner.  JLP

Leinster's season so far & a "Next Gen" matchday squad

No match to writeup this week so I thought I’d have a look back at how things have gone for Leinster so far in this  unorthodox campaign. ...