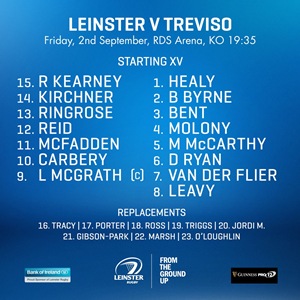 So if there’s a lull in the action during the match tonight and you’re watching with someone you know doesn’t read HarpinOnRugby (yeah, I know, like THAT could happen) turn to them, point towards the pitch and say something like this :

“Can you tell me the former Munster player out there who has won a Grand Slam with Ireland?”

O how they will be amazed when you inform them that it is in fact Joy Neville, who these days is a qualified referee and will be one of Ben Whitehouse’s assistants at the RDS tonight.


Right, that’s enough trivia for now...on to the match at hand.  Rugby’s back baby!  And isn’t it great to have the actual season kickoff at the RDS - that’s a rare occurrence indeed.

Back on August 10 before the preseason series I posted an article titled “330 days of Leinster, Ireland & Lions rugby” where I pointed out that Leinster’s final four regular season Pro12 matches are going to be tricky to say the least :


Our final four matches are Ospreys (a) Connacht (a) Glasgow (h) and Ulster (a)...basically what this means is that if we want to have any hope of a home semifinal, absolutely every single point is going to be crucial, right from the opening kickoff against Treviso.

You can be sure I’ll be harping on that series of matches quite a bit between now and the end of the season.  With around four matches to go last time around, we were just hitting top spot on the ladder...this time around, we’ll want to be there with room to spare if the home semifinal (with a “home” final in the Aviva as reward for winning it) is to be ours.


This means that when you get past all the normal clichés like “no easy matches” and “take nothing for granted” and “we have all respect for our Italian counterparts”, all of which are valid, what’s left is a minimum satisfactory haul of 5 Pro12 points for Leinster tonight.


Sorry - I know that’s quite a bit of pressure to pile on with the season not even having kicked off, but I still stand by it.  Now - to the selection.


The first name that jumps off the page is that of Joey Carbery at number 10, and it’s great to see our first team selection of the new campaign to be one that reflects the work and form shown in preseason.


Cathal Marsh would probably have been the presumptive backup to Johnny Sexton going into the campaign but in outings for the A side, a successful Clontarf outfit and for Leinster in recent weeks, Carbery has shown he can do a good job getting a back line moving, and he has definitely an experienced one working with him tonight.


Alongside him is Luke McGrath, who in being trusted with the captain’s armband is now definitely our presumptive number 9 for the new campaign.  I have been a tiny bit critical of him in recent times but only to be constructive - I think he can quickly make Leo know he has made the right choice and I’d be surprised if he didn’t bag a try few tries for himself along the way, starting tonight.


But for me our most important combination of the season will be in the centre.  Last season it was the one area where we had stability with a solid Te’o/Ringrose axis more often than not.  With Ben gone and Garry not far off a test call up things are bound to fluctuate much more in the 12 and 13 jerseys this year.  Still, while Kirchner did well at 13 in preseason I’m glad to see Ringrose getting the nod there and not on the wing.


As for Reid, he comes with a simple premise, one that he simply must eradicate if he is to become an established 12 in the modern game.  These days greatness going forward can be cancelled out by any perceived naivety on defence, and whatever about Italian sides regularly inhabiting the bottom two rungs on the Pro12 ladder, their centre pairing tonight of McLean and Benvenuti are certainly no slouches so this will be quite a test.


In the pack, it’s the first official start of Cian Healy’s road to recovery.  He did well last week and hopefully will continue in the same vein tonight.  Personally I feel he just needs to focus on the basics, no need for YouTube moments just yet, just play his way back and his natural talents will shine through.


Overall in the forwards what I’m looking for first and foremost is stability in set pieces.  It’s an area that has bugged me for a while now.  100% scrums and lineouts on your own put ins is of course a basic target for any team at this level anyway, but more so for one aiming for a top two finish AND one that has had issues in the past, particularly on attacking lineouts in the opposition 22.


At the breakdown there’s an interesting trio of Ryan, van der Flier and Leavy - the last of whom I see as an alternative at 7 for VdF but he can also cover number 8 and this having the two of them out there along with Dom gives us an extremely competitive and aggressive trio and that is could be where we have the winning of this match.


There are a few interesting names on the bench, also rewards for impressive preseasons.  Have you ever seen a more lopsided pair of props on the bench when it comes to experience?  Still - in Porter we have a great addition and his inclusion is a testament to his own hard work as well as his abilities (looked really good in loose play especially in his recent cameos).


Last on the team sheet but certainly not least is Rory O’Loughlin - it will be interesting to see where he plays if introduced tactically but he did really well at centre in recent outings.


Overall, on top of the set pieces proficiency I mentioned above, I want to see more evidence of the positive attacking strategies I have seen of late.  More intelligent offloading and general use of the ball should see us right tonight and throughout the campaign.


The bookies have us winning by around 22 points.  I’m going to go less and say 14-16 - not to be negative, rather because while I’m confident we’ll get the try bonus,  I reckon a bit like the last time we met the same opposition we could leak a late score or two.


Finally I hope the RDS crowd will give Ian McKinley a warm welcome should he take the field at some stage tonight - what a story and with the exception of course of the times he plays us, I wish him all the best.


Here’s to a satisfying season kickoff in Ballsbridge.  See you there!  JLP