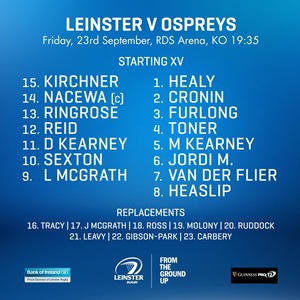 We had an excellent guest post during the week from Kevin O’Brien pointing out the many positives of Pro12 rugby at a time when many would rather look at the faults.

It was also a timely contribution, coming as it did just a couple of days before what is unquestionably the league’s biggest “organic” rivalry, ie between clubs from different unions.

You can say it is because of the fact that they share the lead in league titles with 4 apiece.  You can say it’s because they broke Leinster fans’ hearts at the RDS not once but twice in finals.  I’d be more inclined to say that it’s more because out of all the teams in the competition outside of Ireland, they are the one least intimidated by playing in our backyard - in fact if anything it seems to lift them (though Glasgow are fast catching them on that score).

Last year may not have gone ideally for the Welsh region yet this time they have had a perfect start, with a maximum 15 points from their first three matches including a win at the home of the reigning champions.  Maybe the other triumnphs were over Italian sides but I’m sure we haven’t forgotten that we were unable to find that important fourth try against Treviso on opening night.

That lost bonus point is slowly snowballing as the matches go by into a narrative surrounding our ability to keep our first half momentum going into the second, so this on top of the quality & determination of our opposition gives us plenty to worry about going into tonight’s big match.

So how do we deal with this challenge?  Well, promising and all as young Carbery has been, the return of Johnny Sexton certainly won’t hurt, though when our team was announced, that had been pretty much well flagged by reports and interviews done during the week.  What hit me as the matchday 23 was published was the unorthodox split of forwards and backs on our bench.

It’s hardly a new move in the pro era, but it is definitely a risky one because with only two reserve backs, particularly when they are both halfbacks although Carbery can play 15, you don’t want too many injuries from 9 to 15.  Which leaves us with the question...is it a worthwhile risk?  To which I say - hell yeah.

You don’t even need to look at the names on the Ospreys team to know they are going to target us at the breakdown.  With all that has gone before in this fixture, the logo on their jersey should be enough to tell you that.  Thing is though - the back row just happens to be an area where we happen to be extremely well stocked.

I reckon a starting trio of Sean O’Brien, Dom Ryan and Jack Conan would be more than able for this match, yet none of them are even involved.  So that alone makes it a good idea - now the Jordi. Josh & Jamie combo can go full tilt knowing there is excellent cover available for them for what will probably be tight closing stages.

There’s also another way it works...I mentioned earlier how the Ospreys are used to doing better than others in D4.  That means they probably go into each season with a separate playbook just for Leinster.  And it’s hard to argue that we have become somewhat predictable in recent season.  So after a few days of hard work mulling over their plans for the trip, we throw ‘em a sly little curveball with our selection. Why are they doing that?  Do we need to change anything?

So as you can see, I’m a fan.  It shows how much of a rugby match is played out during the week.  “All” we need to do now is go out on the pitch and get the job done.

If Johnny Sexton performs half as well on his season debut as Jamie Heaslip did in Edinburgh, we’ll be laughing.  And while we have been playing with a new up-tempo style in recent weeks, you can be sure he’s part of the brains trust behind it so not only should he be able to take it up, his demanding nature is sure to lift those around him as well.

As well as the back row, in the pack I am glad to see the return of Mick Kearney and I like this trio of second rows we have in the 23 today.  I know that’s harsh on Mike McCarthy in particular but the axe has to fall somewhere and I reckon Dev & MK can set us up nicely in preparation for Ross Molony to see the game out.  AWJ will do what AWJ does - of that there is no doubt but I reckon we’re well set to minimise his effectiveness.

On the defensive side of things, there is but one sentence required.  Tackles have to be made - end of.

Which brings me to prediction time.  I’m still going to be positive and say we’ll sneak a tight one by 2-4pts.  I’d go beyond the bookies’ 6 point home win if I was sure of us sorting our second-half & dart-throwing issues, plus on a night where breakdowns are going to be pretty much central to everything I’m thinking this ref Mitrea could make them a lottery so I wouldn’t want to go too far in the direction of either team.

The most important thing we can do as Leinster fans tonight is be there and particularly not let an industrial dispute keep us away.  Let’s fill the place and cheer them on to another win over those pesky birds.  JLP