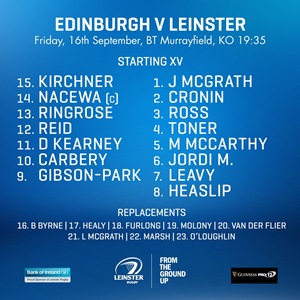 In my match preview last Friday I gave my initial thoughts on Stuart Lancaster’s appointment.  Basically where I landed was “it depends on how he fits in but let’s give our full support while he does”.

During Sky’s coverage of Glasgow v Leinster when they cut to the gantry where our new coaching ticket was situated I felt like I suddenly had the opportunity to use a visual cue to help me dwell on the situation some more.

Now I’m going to be very careful here so there’s no misunderstanding...I’ll be referring to the way they are standing in the above screengrab BUT that does NOT mean I’m trying to “read into body language” or anything.  They’re just standing there, watching the game.  I know that.  But what struck me was the actual challenge ahead for Leinster surrounding this appointment, and the way they happened to be positioned bears this out.

On one side, there’s Leo Cullen and Girvan Dempsey, two men who pretty much bleed Leinster blue, while Lancaster, assuming we’re mature enough to ignore the whole “he’s English” thing, not only needs to get himself familiar with the Irish way of doing things but also hasn’t worked at this level in almost a decade.

You can only assume it is going to take time for them to get a set routine.  Though as we tip into the second half of September, time isn’t exactly in plentiful supply when it comes to preparation for our Rugby Champions Cup campaign.  Embra this week, Ospreys & Cardiff next up, then it’s Munster in the Aviva before we face Castres and Montpellier.

So I guess my point is that we probably should be leaving our critical scrutiny until we play Munster but no later.  Still though, when it comes to tonight’s match there are a couple of general areas I feel we must show improvement sooner rather than later.

Of course I’m delighted to see names like Nacewa, McGrath, Toner & Heaslip back in the starting lineup - who wouldn’t be.  Can we assume they will go from the off and play at full tilt like those who have played the past two games?  I’m not so sure, but this wouldn’t be an overall worry.

The most important thing for Leinster’s long-term hopes tonight is a continuity of the attacking approach we saw against both Treviso and Glasgow.  It was new for us in recent years, but it was also effective and intelligent.  I like the offloading, I like the drawing of defenders, I like the support runs and clearing out.  If we can make this many changes to the team and continue playing this way then the only way is up.

But that leaves us with the two key areas I feel we need to work on - set-pieces in attacking situations, and game management particularly in the second half.

Whenever we win a penalty around halfway that isn’t kickable these days I cringe, because I am in no way certain that we will go on to win the ensuing lineout in the opposition 22.  And of course I mean not just win, but win cleanly enough to set up a maul...once this happens, I’m very confident of a positive outcome.  Hopefully the return of Devin Toner will help in this area, though Edinburgh skipper Grant Gilchrist will do his best to get in the way.

Finally there’s our ability to play smart rugby in the second half.  For the past two weeks we faced different scenarios...one where we needed a fourth try for a bonus point, and another when we needed to bring home a 10-point lead in the final half hour.  We failed both times, so in some ways it doesn’t matter what happens in the first 40 minutes tonight - our ability to make the right adjustments based on what the opposition have presented us will be in the spotlight.

It won’t be easy against an Edinburgh team that has talent like du Preez and Hidalgo-Clyne on the bench, but that said we have the likes of Cian Healy and Josh van der Flier who give us excellent carrying options for the final quarter should we need to get on the front foot quickly.

Then there’s Joey Carbery.  Luckily for Leinster he’s not paying any attention the stuff I’ve been harping on.  Against Treviso I said he kicked too much.  Against Glasgow I said he didn’t kick enough!  Obviously there’s context there but my point is that overall he has done well and thoroughly deserves a third start in a row.  And with the same centre pairing outside him there is continuity in key positions that could well work in our favour at Murrayfield.

So far this season we’re already two points down on last year’s table-topping total compared to corresponding fixtures.  As we went down to Edinburgh on opening day in 2015, this would be a good chance to claw some of those back.

But going back to those areas I outlined above, I’m going to be glass half empty with my prediction this week and say we’re going to lose by 3 points.  The bookies say we’ll win by 3, and I’d agree if I could be sure about accuracy and a clinical second half.  So I guess it’s up to the lads to prove me wrong, and of course I hope they do.  JLP