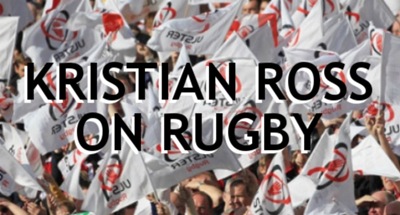 Gloucester finally put their disappointing start to the Premiership season to bed after grabbing a first win of the campaign against Sale on Friday night. The Sharks who had previously beaten Harlequins at the AJ Bell Stadium the week had renewed confidence, but tries from ex Ulster front row John Afoa and Charlie Sharples as well as superb sixteen points from the boot of Greig Laidlaw extinguished any chance of a Sale win. Cameron Nield and Sam James went over for the home side, but David Humphrey’s team finally got off the mark with a solid performance.

Saracens continued their impressive start to the season with a third straight win as they beat Northampton at Allianz Park. Sarries, who this week opened a secondary school in England saw the majority of their points come from the boot for the second week running due to Alex Lozowski, who’s tally of fourteen points made a big contribution to the victory as well as a try from Jamie George. However, it was controversy again for Chris Ashton as he was accused of biting the hand of Alex Waller and now faces a possible citing. If found guilty, a setback of this magnitude may no doubt kill any chances of a return to the England squad having previously been criticised by Eddie Jones in the past. Stephen Myler kicked four penatlies for Saints, but they were never really at the races at the champions once again grabbed four points.

Exeter grabbed a vital first win of the Premiership season as they condemned Harlequins to a second defeat in as many weeks at Sandy Park. Luke Cowan-Dickie was in imperious form as his hat-trick along with two tries from Lachie Turner saw the Chiefs over the line. It wasn’t the perfect afternoon however as Exeter prop Tomas Francis was sent off in a season that red cards seemingly are becoming a recurring theme. Harlequins could have had a try scoring bonus point after Rob Buchanan, Charlie Walker and Danny Care all crossed the whitewash. However, it wasn’t to be for the London club, who’s 125th anniversary year has not started in the best possible fashion.

Bath produced another excellent home showing at The Rec as they sunk Worcester on Saturday afternoon. After a thumping win over the Falcons last week, Bath continued where they left off with tries from Anthony Watson, Semesa Rokoduguni, Matt Banahan and Leroy Houston. George Ford continued his rich vein of form with seventeen points and now seems a shoe in for the England out half position (although there isn’t much competition at present anyway). Neil Annett, Dean Hammond and full back Perry Humphreys gave the Warriors fans something to cheer in a spirited effort, but it wasn’t to as Todd Blackadder’s outfit are starting to tick over like a well-oiled machine.

Bristol suffered a nightmare at The Ricoh Arena as Wasps ran in ten tries to hammer the newly promoted side in Coventry. It was all too easy for Dai Young’s team as Christian Wade, Ashley Johnson and Elliot Daly all bagged a brace each. Tommy Taylor showed why he’s worth an international start as he also went over, with Jake Cooper-Wooley, Matt Symons and Danny Ciprani all getting on the scoresheet. Jimmy Gopperth also added twenty points to add yet another total in his bid to become the Premiership highest points scorer yet again in a match that Bristol were hopelessly outclassed and shown the reality of the challenge they face this season. The away side did manage three tries of their own via Jack Lam, Gaston Cortes and Mitch Eadie, but it was scant consolation as Andy Robinson was left scratching his head in a proverbial mauling.

Joel Hodgson’s last gasp missed drop goal was enough to see Leicester come away with four points on a sun drenched afternoon at Kingston Park. Newcastle started well with a well-executed try from Juan Pablo Socino and took a 10-0 lead when Mike Delany popped a penalty over the sticks to give the Geordie faithful a glorious start to the afternoon. However, Mike Fitzgerald got the Tigers back into the game with a score and Freddie Burns knocked over three penalties to give Richard Cockerill’s men the lead. Hodgson got the Falcons within touching distance a three-point effort of his own, but Leicester held on to condemn Newcastle to a narrow but fair defeat.