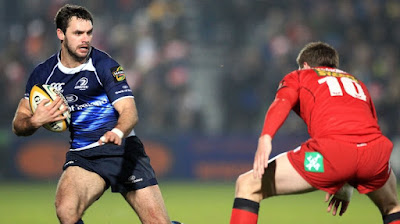 The 28 year old had played in two of the Bank of Ireland Pre-Season friendlies but didn't feature in the third game against Bath nor in the first two rounds of the Guinness PRO12 and having consulted with the Leinster medical team as well as his consultant in the UK, Morris has been forced to retire.

Commenting on the announcement Morris said, "Unfortunately my ankle, which I fractured and dislocated in an incident against Bath in May 2015 and have rehabbed for 15 months wasn't right after the Gloucester game, so I decided to seek further opinion and in the end I've been left with no choice but to retire from professional rugby.'

"While at 28 I'm disappointed that my rugby career has come to an end, having completed a degree in Business and Legal Studies at UCD and recently passed CFA Level 1, I feel I am well positioned to make what is a difficult transition and I am excited about what lies ahead.

"I have had some wonderful moments with Blackrock College, with Leinster and of course with Leicester Tigers and I look back upon all those years with fond memories. I am also extremely grateful to Leo and the rest of the Leinster coaching team for giving me this opportunity to prove myself in a Leinster jersey once again. It was a great feeling to pull on that jersey in Navan and in Tallaght and I gave it my all to get back there and to wear it once more. I wish the team every success for the season ahead.

"Finally I'd like to thank my family, girlfriend and friends for their support over the last few weeks and indeed over my career.”

Before re-joining Leinster in the summer Morris played 75 times for the Leicester Tigers scoring 18 tries in his five seasons. The former Blackrock College student joined the Premiership side from Leinster in 2011 having played on eight occasions for his home province scoring three tries in four starts in the Celtic League.

He won a Premiership medal in 2012/13 with Leicester scoring a try in the final in Twickenham against Northampton and had also played for the Ireland U20s and for the Emerging Ireland team on three occasions.

Leinster Rugby Head Coach Leo Cullen said," "Since Niall re-joined Leinster on a short term deal, he has worked incredibly hard to get himself back playing at the highest level.

"We could see during our games against Ulster and Gloucester the quality that Niall can bring to a team so we are very disappointed to hear that he now won't be able to continue playing.

"All the players and staff would like to congratulate Niall on what he achieved in the game and wish him the very best for what he focusses his energy on next.”