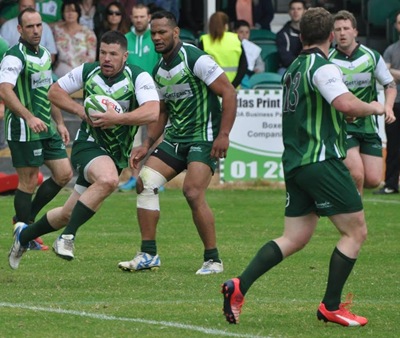 Casey Dunne, Ireland International Captain, in action and the Back of a player's jersey where logo will appear

The Ireland rugby league team is offering businesses the chance to win some excellent free exposure in the form of a sponsor slot on their jersey.

Rugby League Ireland is offering a slot on the back of the team’s jersey for four international matches next month — including two crucial World Cup qualifiers — as the prize of a competition.

The winning business will see their company’s name take pride of place during international matches against Malta and Jamaica at the Carlisle Grounds in Bray, as well as the World Cup qualifiers against Spain, in Valencia, and Russia, also in Bray.

The competition, which is being run on the Rugby League Ireland Facebook page, is expected to draw interest from both sides of the border because the Ireland rugby league team, like its rugby union equivalent, is draw from throughout the island.

Ireland started the international rugby league season with an encouraging 26-60 victory over Italy in Brescia at the weekend. Victory over Spain and Russia next month will ensure they travel to the World Cup in Australia and New Zealand next autumn.

Rugby League Ireland director Richard Egan said: “This is a fantastic opportunity for a business to reach a large audience for free. Coverage of the Ireland’s World Cup qualifiers will reach a big domestic and international audience — including thousands who will attend our home matches in Bray. They’ll also be supporting their national team’s efforts to reach the pinnacle of its sport — the Rugby League World Cup.”

All any company has to do to be in with a chance of winning is like the Rugby League Ireland Facebook page and share our competition post. The winner will be picked at random from the entries on Friday.

Leinster's season so far & a "Next Gen" matchday squad

No match to writeup this week so I thought I’d have a look back at how things have gone for Leinster so far in this  unorthodox campaign. ...