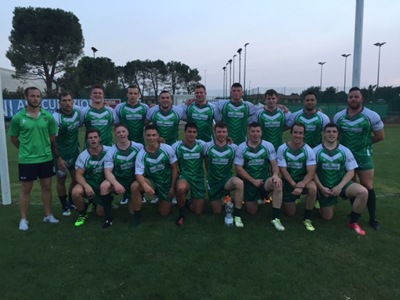 Captain Casey Dunne scored a hat-trick as the Irish Wolfhounds kicked off the international rugby league season with an 11-try victory in Brescia.

The team of Irish-based players finished strongly in an entertaining match which, despite the final scoreline, was competitive for more than an hour and provided a great work out for the Wolfhounds.

Indeed it was only when they scored three times in the final 10 minutes that Ireland ran away with it.

It means the Wolfhounds continue their unbeaten streak from last season and will head into home international matches against Malta (October 8th) and Jamaica (October 15th) in Bray next month full of confidence.

Several players will be keen to continue their fine form from this match to press for inclusion in the full squad, which includes overseas-based players, for the vital World Cup qualifiers against Spain and Russia, also next month.

With ideal, balmy conditions and a large and vocal crowd, the Italians set out their stall from the start to play an open game, scoring first after good build-up play around the Irish fringes.

This stung the Wolfhounds into action and hooker Connor Phillips darted over to level the scores but the Irish were found themselves behind again soon after as the Italians crossed for their second try but missed the conversion.

Irish captain Dunne then drew the sides level with his first try before Jordan Hylton put Ireland ahead. Phillips continued to press hard around the ruck and was rewarded with a second score which was converted to see Ireland lead by 10 points. The lead was then increased when the impressive Gareth Gill crashed over. As half-time approached the Irish were caught out and the Italians ended the half with a flourish. As the hooter sounded it was Italy 16-26 Ireland.

Coach Carl de Chenu composed the team at half time and asked the Wolfhounds to keep patient with the game plan and to ensure they used the experience across the park.  This advice was headed and in the second half the Wolfhounds were able to show their quality.

After an initial score by Casey Dunne, the Italians swung back into possession and got momentum building via two tries. However, it was Ireland who then took dominance and they had scores from Sam Boyd, Casey Dunne, Rob Armstrong, Conor Mackey and finally James Kelly.  Dunne’s hat trick secured him the man of the match award but there were great displays across the park by Phillips, Gill and Russell.

Kelly and McKelvey were both celebrating their birthday’s on the day and had great reason to celebrate with the win. The try of the day was for Rob Armstrong who went almost the length of the field much to the delight of the crowd who were hugely sporting throughout.

Wolfhounds coach Carl de Chenu praised the manner in which his team kept their shape and composure throughout the match. He added: “These games offer a great chance for players to experience rugby league at international level and are a great growth opportunity for the sport across other developing nations. There is no doubt that the players in Ireland have the potential and it’s great to see players coming through from U19s and Students and into the senior team.” 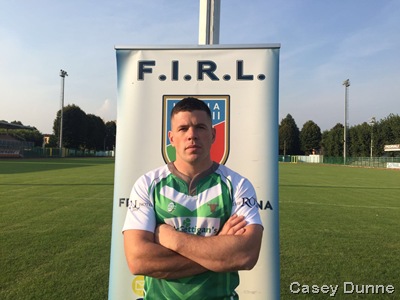