And so we reach Part 2 of this year’s unique Preseason Pilgrimage and after a great day in Navan last Saturday we now turn to a more familiar venue for watching Leinster rugby, namely Tallaght Stadium.

Ironically it was also around the time of the Olympics when Gloucester last visited the home of Shamrock Rovers and Leinster, led by Ian Madigan, scored a comfortable 33-22 victory.  Little did he know that four years later, rather than suiting up for the rematch, he’d instead be lining out for his Bordeaux debut against the reigning Top14 champions!  Best wishes, Mad Dog, by the way, if you’re reading, which I’m sure you are.

So on to the match in question this weekend and the starting lineup.  It will be good to get a look at Garry Ringrose in the 13 jersey, though Rory O’Loughlin did impress against Ulster.  Hopefully he’ll be able to have another full campaign for us - if so, he will undoubtedly continue his upward curve.

Cathal Marsh (who joins James Tracy and Dom Ryan as the only survivors of that 2012 meeting)  starts at out half, his first opportunity to show he is ready to back up Mr Sexton when needed.  Things didn’t go ideally for him when called upon at senior level last season, but after a long time running a mostly successful Leinster A backline he deserves his chance, though on last weekend’s evidence he has solid competition behind him in Ross Byrne and Joey Carberry, at least one of whom will no doubt also feature this time.

In the pack, the starting lock pairing of choice is Ian Nagle and Hayden Triggs...this is shaping up to be a year of tough competition for the second row at Leinster, partly due to the identity of the coach but mostly due to the abundance of able bodies.  Personally, at time of writing these two make neither my first nor my second string but maybe I will think differently come full time.

Another area that is up for scrutiny is the front row.  James Tracy impressed me last week with his work rate...now it’s a chance for Bryan Byrne to show what he can do up against Richard Hibbard.  Either side of him are Dooley and Bent, both of whom will be looking to cement their places in the pecking order with much up and coming youth on the bench including Under 20 prospect Andrew Porter.

I have to say I like the way Gloucester have announced full XVs to start each half...providing they stick to it that will make life a lot easier should I get to “liveblog” the match as I did last weekend.  They have a lot of familiar names on show as well as Hibbard...Hook, Afoa, Twelvetrees, Morgan, as well as a name that may be familiar to Leinster fans, Mariano Galarza, a lock who had a brief stint himself at the RDS in years gone by.

There’s no doubt it has been a bad week for Leinster on the personnel front...the injury list doesn’t seem to be getting any shorter in time for the season kickoff plus there’s the news that Kurt McQuilkin will no longer be in charge of what had become overall a solid defence.

But this just makes for opportunities for others and this prolonged preseason schedule is perfect to size up the entire squad.  It should make for an interesting afternoon of rugby out in Tallaght, I hope to see you there!  JLP 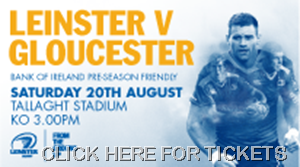