On the latest STH stash 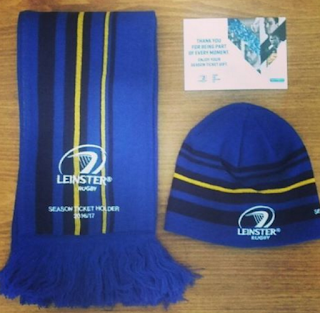 TG: ...there were a hundred and sixty of us living in a small shoebox in the middle ‘t road.
MP: Cardboard box?
TG: Aye.
MP: You were lucky. We lived for three months in a brown paper bag in a septic tank. We used to have to get up at six o'clock in the morning, clean the bag, eat a crust of stale bread, go to work down ‘t mill for fourteen hours a day week in-week out. When we got home, our Dad would thrash us to sleep with his belt!
GC: Luxury!

The online discussion over this year’s “free stuff” offering from Leinster Rugby to their season ticket holders reminds me of that iconic “Four Yorkshiremen” sketch from Monty Python.


Basically somebody would put up a photo like the one above on Twitter, Facebook & such along with a message akin to “this is all we got”...and the replies would either involve disbelief from fellow Leinster fans or stories from those of other provinces competing over who has gotten less over the years.  “We only got a mug!”  “Mug? Luxury!!! We once got only a paperclip and that was a good year!!!”


Given we call ourselves a “fansite” we probably shouldn’t let this issue go unmentioned.


On the plus side, the scarf and hat are quite nice this year.


When it comes to the quantity not the quality, maybe it’s not so much a question of “Why are we getting so little this year” and more one of “Why did you give so much in previous years when you weren’t sure those levels could be maintained?”


Then there’s the shoebox for storing memorabilia - that was a brilliant idea and in many ways I miss that more than all the other knick knacks!


But I’m pretty sure fans don’t buy season tickets because of the free stuff that goes with them.  What matters is what happens on the pitch and a good start to the season for Leo’s men will make you forget that you ever read this post - I certainly won’t remember writing it.


Still...if you feel differently about it by all means let us know using any or all of the various social media do-hickeys.  JLP
at August 09, 2016