Leinster Rugby Staff to 'Shave or Dye' for McQuilkin Family 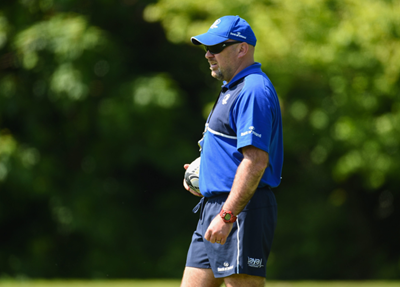 The Leinster Rugby coaching and back room team will host a 'shave or dye' event this Tuesday and have put together a charity page to help raise funds for their departing colleague Kurt McQuilkin and the wider McQuilkin family.

To make a donation please go to: http://bit.ly/2bOBz5k

It was announced only two weeks ago that the Leinster Rugby defence coach, Kurt McQuilkin, would be leaving Leinster to return home to New Zealand for personal reasons.

Kurt is a former Leinster player and captain and was also defence coach under Michael Cheika as part of the backroom team that brought a first ever Heineken Cup to the province in 2009.

The former Lansdowne clubman, who played 32 times for Leinster and was capped five times by Ireland in the mid-1990s, re-joined Leinster in time for the start of last season and took over the defensive duties for the club.

Under his stewardship Leinster conceded the least amount of tries in the Guinness PRO12 as they reached the Final in BT Murrayfield.

Commenting on the news at the time Leinster Head Coach Cullen said, "This is very sad news for Kurt and his family and our priority is supporting Kurt in his decision as best we can.

"He will head back home with our very best wishes in very trying circumstances and with the thanks of everyone at Leinster Rugby for his stellar contribution over the last 12 months.

"Right now our focus is on Kurt and ensuring that his move back home is as seamless as possible."

That focus to help out their friend and colleague, has led to this.

A fundraising campaign set up by the Leinster Rugby back room team that will see them 'shave or dye' their hair in aid of the McQuilkin family this Tuesday the 30th August 2016 in Leinster Rugby HQ.

All proceeds from this campaign will be donated to the McQuilkin family to help them at this most difficult of times.

Finally Leinster Rugby would like to acknowledge the support of our two charity partners Aware and DEBRA Ireland with this campaign.

To make a donation please go to: http://bit.ly/2bOBz5k

And make sure to check out the Leinster Rugby social media platforms on Tuesday for the shave or dye updates!