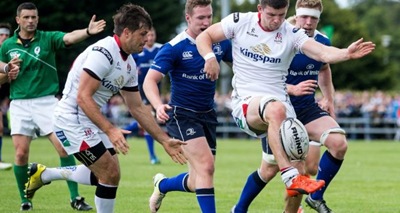 They say to check Wikipedia for info is the laziest form of journalism and in many ways that’s true...but even so, the writeup on the history of Navan RFC is quite an interesting read.  In fact, it’s pretty much word for word what they have on the club website anyway.

What interested me most with regard to Saturday’s event was this small portion :

The Ardboyne Hotel developed an expanded car park which the club has use of for important matches.

Yeah, I’d say for decisive league matches they might need a bit of extra parking at the hotel beside the club, but I doubt it has ever been on this kind of scale before and no account of this particular match would be complete without mentioning just how well organised the whole occasion was.

Not only was there ample space at a business park just a few minutes’ walk from the ground, there were more than enough volunteers on hand to show you the way literally into your spot.  The many first-time visitors among the attendance (which was estimated as close to 4,000, including several sporting Ulster jerseys) were left with the minimum of fuss finding their way to the impressive grounds at Old Balreask.

Once in the ground, there was just the right amount of kiosks providing beverages cold and hot, alcoholic and not, plus of course the usual assortment of snacks and such.

And right at the back of the stand there were excellent provisions for the media, even us online types, with plenty of space to plug in all our gadgets to pass on our take on what was happening out on the pitch.

When the match kicked off it was clear just where the line between club and interprovincial rugby is drawn....no TMOs, no big screens, no stadium clock, no Maire Treasa Ni Dhubhghaill or other such TV hosts around to set the scene.  If you wanted to follow the action, you had to do it the old-fashioned way, by actually watching it yourself!!!  Fancy that eh???

Of course from the point of view of someone trying to “liveblog” the match the first half was relatively easy to keep track of having access to the starting lineups but as always with these occasions once the infinite number substitutions are in full swing you’re blagging it as much as reporting it...hopefully everyone on the receiving end of the information was aware of this fact otherwise my rep took a bit of a battering…for example I seem to have awarded a try to poor Dom Ryan who wasn’t even on the pitch!

This of course brings me nicely to that very action...the match result may have been a convincing victory for Leinster but anyone who has followed preseason encounters closely before will know that even when interprovincial rivals are involved there are no bragging rights at stake either way.

If anything, given the squads announced by the two coaches, this is exactly the kind of result there should have been from this match as Les Kiss brought a very young group down with him while Leo Cullen had a fair amount of test caps at his disposal for the afternoon.

But I’ll let the Ulster blogs tell you how their players got on...it’s finally time to harp on the boys in blue and how they were looking in their first proper outing.

Overall, I have to give a thumbs up.  Of course there were mistakes, of course everything wasn’t perfect, but what you are looking for in encounters like these aren’t pieces of individual brilliance, more a sense of how the operational systems are working all over the park and both with and without the ball things we definitely going well.

The defence was just as it should have been given the high standards that were set for most of last season.  Two Ulster tries on the day were the result of our backfield having problems dealing with a ball chipped over the top...of course that in itself isn’t great but the fact that the visitors had to resort to that was because in general line breaks were few and far between.

But what I’ll be looking for more than anything else in this campaign as compared to last is a better sense of organisation with the ball.  No good keeping the other side of the scoreboard low if you can’t get yours higher.  And for the full 80 minutes I have to say the “pill” was well marshalled around the field by both Ross Byrne and Joey Carberry.

Like I pointed out earlier, not everything came off, but considering this was the first run out of the preseason there was a decent amount of confidence about our general play, fixing defenders, using the pack when required, getting it wide when required, etc, etc.  As I said at one point of the liveblog : “Almost like they've had a World Cup winner helping out with the coaching!”

When it came to stand out players there were a couple of good line breaks from Rory O’Loughlin that led to Leinster scores, James Tracy put himself about a lot and looks set to push on and challenge the two international hookers ahead of him at the province and Ross Molony further enhanced his reputation as a lineout poacher.

I wasn’t keeping count of the scrums but there were a lot...I mean a LOT.  And with all the chopping and changing you couldn’t really determine who was making the difference, plus Leinster shipped a couple of second half yellows courtesy of Ian Nagle and Andrew Porter.  Let’s just say there were success stories for both sides at different scrum situations.

And with the scores locked at 14-14 it looked as though we were in for a close finish but in the dying moments a combination of Leinster’s extra experience around the park and Ulster’s willingness to try a few more risky passes that didn’t really come off saw the home side through for a few late tries that gave the final score that lopsided look.

I know full well that Leinster Rugby has a standing agreement with the RDS to host matches there, and also that not before long there will re-development which will make for even more seats to put bums on.  But hopefully there will always be room on the calendar for days like this one.

There is no doubt that Navan RFC set the bar high on Saturday, but I am equally sure there are plenty of other clubs both within and without the capital in all corners of the province that will be chomping at the bit to show they can at least match them.  Be they preseason friendlies or even British & Irish Cup matches I certainly hope they get the opportunity.

And now, this unique little rugby pilrgimage moves on to Tallaght next Saturday.  Can’t wait! JLP