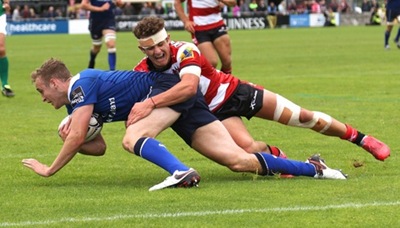 Watching Leinster play at the home of Shamrock Rovers reminds me of the time I attended a League of Ireland fixture between the “Hoops” and Bohemians in the RDS back in the mid to late 90s .

At the time Rovers were more like “Wanderers” in that after selling their previous home in Milltown they proceeded to play in different stadia all around the city before finally settling in Tallaght.

My only real memory of the contest is that of Bohs fans taunting Rovers’ Paul Whelan (brother of former Liverpool & Ireland hero Ronnie) for the entire match by chanting “You’re a fat bastard Whelo” to the tune of “Go West”, which  today is better known in rugby circles for “Stand up for the Ulstermen”.

This of course was long before Leinster Rugby could have even dreamed of filling the Ballsbridge venue.  Professionalism was already in its infancy worldwide at the time but here it was but a mere twinkle in the IRFU’s eye.

So in many ways it’s interesting to see how the two sports have progressed on this island since then.  Rovers have won many national titles it’s true, but in Europe their best achievement has been one campaign in the group stages of the Europa League.  Leinster, on the other hand, have fared slightly better in the continental arena in that time and they are the principal reason the RDS now needs to be made bigger.

Generally I’m not one for making claims over how much “better” rugby is than any other sport, and that’s not really what I’m doing with this opening...it’s just I don’t often get the chance to make the point that I believe it a shame that the League of Ireland pretty much finds itself at the same standard today as it did way back when the international team was having its heyday in the late 80s early 90s, and there is no doubt that rugby has done much to fill that void for Irish sports fans..

OK - on to the oval ball action.  No disrespect to the Ulstermen but that was a much less experienced side they sent to Navan last week and despite the fact that their former star David Humphreys, now in charge at Gloucester, named completely different XVs for each half on this occasion, both contained very familiar names at senior level like Billy Twelvetrees, James Hook, Richard Hibbard and John Afoa.

Leinster, on the other hand, had assembled a squad very similar to that from a week before, with notable starting exceptions being Garry Ringrose at 13, Cathal Marsh at 10 and Josh van der Flier at 7.  The rest of the starting lineup was pretty much a combination of youngsters and newcomers to the Leinster fold, and for the opening quarter, it showed.

It’s not so much that Gloucester were “all over us” in that spell; in fact we had the majority of both possession and territory.  However when we had it, the visitors’ line speed was such that we found it extremely difficult to make any kind of advance and our attacks would invariably end either in a knockon or a grubber through that got nowhere.

And when Glaws did have a chance to do something with the ball, their own grubber was much more successful, making it all the way to the try line where our scrum half Nick McCarthy did well to recover but his clearance gave them an attacking lineout in our 22.  From there they were able to work the ball systematically from one end of the pitch to another forcing an overlap which Tongan winger David Halaifonua was able to convert in the corner.

This did not augur well for Leinster’s fortunes.  Our only chance of advancing the ball at that stage seemed to be referee John Lacey catching a Gloucester defender offside.  But thankfully, the next time the visitors were down at our end, we looked a lot more like a side coached by Kurt McQuilkin and held them out for over 20 phases before winning a clearing pen.

Now I’m not going so far as to say that the rain was the starting point of Glaws’ demise in this contest, but although the morning downpour had cleared in time for kickoff, it returned around the half hour mark and this is when we levelled the scored courtesy of a fortuitous try by Adam Byrne.

In doing my “live-blog” of the match I’m pretty sure I typed the word “grubber” more often than in my entire time blogging before.  It was the tactic du jour for both sides and one from halfway by Barry Daly made it all the way to the Gloucester line where a covering defender struggled to deal with it.

Despite having himself already slid over the tryline, Adam Byrne somehow managed to reach back, collect the ball, and plant it down right in the corner.  Well...DID he actually plant it down?  No TMO for this occasion.  I trained my binoculars on the discussion between Lacey and his AR who’s body language seemed to suggest he “couldn’t see a reason not to award the try” and thus the ref’s arm went up.

Almost immediately afterwards we crossed again, and this time we managed to find an innovative way to get through the onrushing Gloucester defenders, one which was to bring us rewards for the rest of the match.

It seems that we have finally discovered the art of successive offloading at the point of contact...one brings it in and lays it off in the tackle to a receiver who it turn has someone in support.  On this occasion the exchange released Hayden Triggs on a marauding run deep into the Gloucester 22 where we set up some more phases before scrumhalf Nick McCarthy grabbed it from the base and darted over.

Shortly afterwards it was pretty much deja vu for Leinster as the same player finished a move created in almost exactly the same way.  After struggling in the opening stages all of a sudden it was 19-5 and we were looking comfortable.

That wasn’t it for the first half scoring however because Humphreys’ men had one more try in them after a maul got them to the line before captain and scrum half Will Heinz gave a perfect lay off to Halaifonua who went over for his second.  The conversion was good and we had a 7-point game going into the break.

And so we had the expected raft of second half changes...as someone reporting on the match I did like the way Gloucester had their XV for this 40 minutes announced in advance, though the Leinster team was called out shortly after the period kicked off.

Notable changes in our lineup included Joey Carberry at 10, Andrew Porter at 1, Fergus McFadden at 14 and most of all Zane Kirchner at 13 - we lost a lot of key names in the centre over the off season and I had thought Ferg was going to step into the void but it would seem that honour has gone to the South African.

Porter, who excelled for the “Wolfpuppies” at the World Under 20 Championships in June, was up against none other than John Afoa at scrum time.  The former Ulster prop managed to draw a couple of penalties on his own side’s put in but there were other scrums when our young Paduan learner held his own.

The first fifteen minutes of the second period were a bit scrappy but just as I was typing that the rain seemed to be getting heavier, our scrumhalf Charlie Rock brilliantly scooped the ball up off the turf before some amazing offloading involving himself, Barry Daly and finally Carberry who gave it to Rory O’Loughlin for an easy trip over the line...he certainly has put his hand up in this series at a time we are looking for centres.

Next it was time for our defence to go up a gear and we continued to defy the slippery conditions with some impressive line speed of our own.  Now it was the visitors who needed a penalty to get into our 22 though the next time they did, Ben Morgan got himself over the line and suddenly we were back to a one-score game.

By this stage we were entering the closing stages...Gloucester provided what was the try of the day after a succession of kicks through were followed up and taken before Purdy touched down out wide….Hook was unable to convert leaving the final margin at 2 points in favour of the home side.

All in all it was another impressive outing for Leinster.  I have to say I’m a fan of this new intention to offload...the best thing I can say about it being that I can’t attribute it to just one player, nor even to one set of players - both forwards and backs were at it throughout.  It’s a valuable skillset to have and one we have most certainly lacked in recent seasons, and it seems to be something the entire squad has been working on.

On the defensive side of things, maybe at times we looked a bit rusty but as I said earlier we kept our shape well for the most part...hopefully we’ll be able to find a suitable replacement for Kurt who can keep those standards right up where they need to be.

When it came to the occasion itself, the staff around the Tallaght Stadium were extremely friendly and it is definitely an impressive venue they have out by The Square, but unfortunately the morning rain seemed to scare off most of those who had planned to pay in on the day though the main stand was pretty much full and much like Gloucester’s last visit in 2012 there were quite a few who made the journey over from England’s west country.

I wouldn’t mind seeing the place used a bit more often for rugby in the future...perhaps a double-header of all-Dublin Ulster Bank league matches on the free weekend before the start of the Six Nations?  Just a thought.

And so that leaves us with one more chance to have a look at our squad before the big kickoff, back at the more familiar surroundings of Donnybrook on Friday.  I’d expect there to be a few more senior players appearing that night, though it has to be said the youngsters have done their chances absolutely no harm for the most part in the last couple of weeks.  JLP