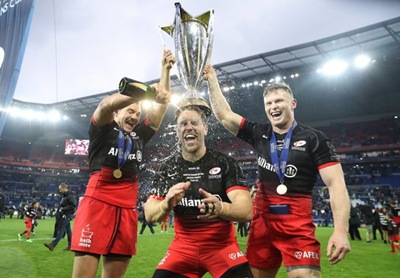 Ye Gods, that was a boring match in Lyon on Saturday.

OK, yes, I know that sounds like sour grapes coming from an Irish fan, but I don’t really care.

I will clarify one thing though...I’m not just referring to the actual 80 minutes  when I talk about the match being boring.

Let’s face it - showpiece matches in any sport can be low-scoring affairs.  #RWC2011 final anyone?  There’s a trophy on offer to the winner on the day.  It’s cup rugby.  That’s how it goes.  We don’t really get to wish for “free-flowing” or supposed “perfect” egg-chasing on occasions like these.  Of course it’s great when we DO get them, but then it should be a bonus given what’s at stake on the day.

While of course I can’t speak for fans all over Europe, the reason I felt Saturday’s match in Lyon struggled to capture the continent’s attention was that I doubt anyone really gave a damn about it outside the supporters of the two teams in question.

Now you might say that about any deciding match in any sport, and yes, that is true to an extent.  But here’s my point - the semifinals were three weeks before, the quarterfinals a few weeks before that.  As for the pool stages, they were over back in January, with the Six Nations, supposedly the pinnacle of the season, taking place in between.

So with most teams that were already eliminated from this year’s competition distracted by things like qualifying for next year’s one, or making domestic playoffs, or avoiding relegation, the current format really does little to help promote the competition’s billing as the continent’s premier provincial prize.

And when we turn our minds back a few years to 2012, when we had an all-Irish final and 3 Pro12 semifinalists, the situation was more or less exactly the same.

Then, the final at Twickenham was an amazing day out...but only for Irish fans.  Did it capture the imagination of the rest of the continent?  Well, yes, but only when it came to imagining ways to restructure on account of a perceived “unfairness”.

On that restructuring...I have said many times that the new way of doing things has been good for the Pro12 itself - last week’s final round of regular season matches was a testament to that fact.  But that silver lining can’t hide the cloud.  The overall European format still has many of the same flaws it had before the “BT revolution”.

Aside from the financial inequalities across the “domestic” competitions (hardly a minor topic I know but you’ll already find plenty of articles in the ruggersphere based on it), two things irk me about the new setup.  Most of all there’s the collective failure of BT & Sky to resolve their differences and thus avoid the fans at large losing out.   As I said in the comments section of a post on our Facebook page over the weekend, “One subscription service holding the rights is bad enough... two is borderline criminal IMO.”

But going back to the format...for me, the biggest problem with the Heineken Cup was the fact that it was spread out across the season.  Two matches in October, two in December, two in January, then if you DO manage to squeeze out of your pool, you have to pray your best players don’t come a cropper in the Six Nations during the 3-month wait until the quarterfinals.  Many harp on the importance of “momentum” in sport…well in this particlar tournament, there is no hope of building it beyond two weeks at any stage.

And why was it structured this way?  Because we wanted our own version of soccer’s Champions League and thus figured it had to be as similar to it in structure as possible.  And what did we do after all the aggro when we had a chance to change it?  We made the damn thing even MORE like the Champions League, all the way down to the orchestral music as the teams take to the field!!!  To coin a phrase from a well-known referee, “This is not soccer.”

Here at Harpin Manor we will always be of the opinion that a professional rugby competition should be played over successive weeks as much as is humanly possible.  That helps the coaches as it keeps the squads together, and it helps the marketing as it keeps the public’s interest levels up where they should be.  The EPCR might argue that they have tried to address this by making the knockout rounds closer together than they were in the Heineken Cup era.  I would argue that this is nowhere near enough.

We only have to look at the way SANZAAR lay out their season to see what works.  Their main provincial competition’s new format may have its critics, but that’s more to do with the “who plays who” rather than the “when”.  They have 20-odd consecutive weeks of Super Rugby, leading into the Rugby Championship, leading into the World Cup...surely I’m not the only one who reckons that gave them an edge?  Remind me who made the semifinals of #RWC2015 again?.

But apparently change is a-coming.  No test matches scheduled beyond 2019 means the entire global calendar could be about to receive an overhaul.  The question is though...will Europe be ready, willing and able to make the necessary changes?

And by Europe, I suppose I mean England, now that their #RWC2015 disappointment has been all but airbrushed out of history by a Grand Slam and a long-awaited (and much deserved by Sarries, to be fair) European crown.  They could argue that now that they’re winning, it’s not broken “any more” so why fix it.

We fans will have to wait and see.  AND pay our subscription charges, of course, if we want the “full experience”.  JLP