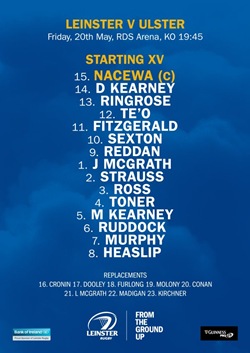 This season Leinster have won 11 out of 11 at home in the Pro12, but defeat against Ulster tonight will not only make that stat irrelevant, it will also cement the crushing defeat to Wasps in November as the 2015/16 campaign’s season’s most lasting memory.

Leo Cullen and his coaching staff shouldn’t need a sentence like that to help motivate their troops for this Pro12 semifinal.  Occasions like these are ones for which the term “playing for the jersey” was originally coined.  But going on recent form, I can’t help but feel that motivation like that is exactly what is required.

Of course there are numerous ways to remain positive about this fixture for Leinster...we DID finish in first place after the regular season, Ulster HAVE struggled to win in Ballsbridge over the years, and we DO have that wonderful nugget of information that no away team has ever won a Pro12 semifinal.

But even though the bookies appear to have been swayed by the above data and have us winning by four points, I cannot see any way we can look at this match other than Ulster being firm favourites to finish on top - not by as much as they did recently in Belfast, but still with a decent amount to spare.

It’s a simple enough thought process...at Leinster we have star names and experience to burn in our squad, but when they have come together on matchdays of late it hasn’t translated into a performance that gives the impression that they are ready to win a championship.  Meanwhile, our fellow playoff teams have each come into this crucial part of the season with more than their fair share of momentum.

Another sign that Ulster should be favourites is their unchanged squad from their comprehensive win over the Ospreys in Swansea from two weeks ago.  And with their halfback combo of Pienaar and Jackson definitely clicking a lot more than they did when these two teams met at the RDS back in November, there is no doubt that they will be counting on their 9/10 positions to cause the most damage.

So how do Leinster stop them?  Is it possible with this matchday 23?  Well, as I have said, it’s not that we don’t have the players (for example, provided he’s definitely fit it’s great to see Luke Fitzgerald back again)  we just need them to play together.  To put it simply...if we were to lose tonight having clearly played the way we know we can only to be outdone by our visitors, I could at least take some comfort.

Now let’s have a look at some points that could be determining factors assuming Leinster do find their mojo ahead of kickoff time.  The biggest battle should come in the pack where the two teams have varying strengths.

Ulster will definitely miss the considerable ball-carrying power of Nick Williams - meanwhile Leinster have a lot of threats in this area both starting and on the bench.  But strong carries can be negated by a canny openside and the visitors definitely have that in Chris Henry, while on our side with Josh van der Flier injured we have opted for Jordi Murphy.  Personally I’d be happier with Dan Leavy at least available to bring on, though Richardt Strauss might well be poised to pick up the ball-hunting slack.

And when we discuss the breakdown, we must also discuss the referee.  I didn’t think Ian Davies was up to the task of reffing our match against Munster in April, so you can imagine how I feel about him tonight.  It’s not that he’s a bad ref per se, it’s just I have my doubts of his ability to handle the pressure.  It would be a shame for this match to be soured by referee controversy but I’m reasonably confident I will be harping on some injustice or other in Monday’s writeup.

In the backline, it’s all about Sexton for us.  It must have been tough for him to watch Racing lose to Sarries last weekend...many seem to have forgotten that when he left the European stage in the Parisian club’s colours, his team were in the lead, ironically against the same Premiership opposition, with minutes left on the clock only for his team-mates to blow it with a senseless penalty.  This hasn’t been his greatest season by a long stretch but going back to my opening statement in this piece, the reverse also applies.  A world class display tonight and much of what has gone before can be forgotten.

Then there’s the Leinster crowd.   There’s a massive amount of Ulster fans coming down for this one, making it a sell out.  That will of course make for a cracking atmosphere at the RDS, but it is imperative that we make ourselves heard.  It’s called home advantage but it mustn’t be taken for granted the fans have to play their part in making it real to give Isa, Johnny, Jamie and the lads all the encouragement they need.

Officially, based on recent form, my prediction has to be Ulster by 5-7pts.  Does that mean I don’t think we can do it?  Of course not – I guess it’s just my head ruling my heart on this occasion.

But the heart hasn’t completely given up, that’s for sure…here’s to a memorable night for Leinster, the Pro12 and Irish rugby.  Come on you boys in blue...get out there and prove the doubters, me included, to be way off the mark.  JLP

PS : Best wishes to all Ulster fans making the journey...well - maybe not quite the BEST wishes, but you know what I mean!!!