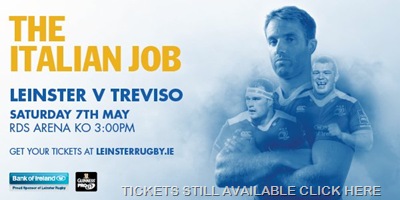 From the look of Leinster’s promo pic for this fixture, it seems my blanket embargo on the use of the phrase “Italian Job” remains unheeded, but what can you do!!!

It has been a long, demanding and often painful season for Leinster & Ireland.  All those hopes going into the World Cup dashed against Argentina, then pretty much every doomsday scenario we imagined when we learned the identity of our Euro pool mates gets realised, THEN a quest for a Six Nations “Three-peat” never really get off the ground and finally in recent times a Leinster side full to the brim with test experience can’t find a way to finish strong attacking opportunities.

But see those opening two paragraphs?  They contain all the negativity you’re going to see in this preview.  Frankly I’ve had enough of hearing it, reading it and most of all writing it in recent times.  The thing is, going to watch your favourite rugby team isn’t all about the nerdy technicalities I usually look to harp on week on week out.

Tomorrow I’m bringing my 7-year old son to his first game.  I have asked him several times over the past couple of years if he wants to go and there were always more pressing matters for him at home (usually involving some Lego scenario or other) and I thought it best not to pressure him.  Finally he has given me the green light, on the condition that I also bring his best buddy.  No problem there.

So let’s just say that while of course I will be paying mind to Leinster’s progress as well as that of the other proud provinces all trying to improve their playoff/European prospects, my main focus will be on matters more general, and some might say, more important.

I mean – what was I supposed to do when he showed he was willing to come along…say “ah, don’t bother, we’re crap these days”????

Sure - as hardcore fans we have our own “ideal” way of playing the game of rugby union...some love it chucked around with tries going over the line every few minutes - others, like me, appreciate the defensive element of the game as well even if it means lower scorelines and more penalties.

But sometimes we have to remember that in a crowd over over 10k at the RDS or anywhere else around the Pro12 for that matter, for every one of “us” there are several others who understand and/or appreciate what’s going on a lot less than we do.  Yet they are still there, and while the overall crowd numbers may not be what they were when we were winning major silverware, they’re still decent compared to the rest of the continent.

So maybe this weekend we can appreciate the occasion at least as much as the match itself, particularly through younger eyes.  Let’s not forget that one day in the far off future we could well be relying on them to bring us ;-)

There’s even optimism to be found in the actual rugby.  Honest there is!!!  OK - Treviso’s victory over Connacht last weekend bucked a dismal trend for the Italian clubs in what has become a perennial “race to the bottom” for them both.  Yet the fact remains that while our defeat in Belfast last weekend left us in 3rd place, the two teams above us must play each other so a top two finish is very much in our own hands and in this league we couldn’t have picked a better opposition and venue to get it done.

And it has to be said the players have been making the right noises in the media during the week, Jonathan Sexton especially.  To paraphrase, they’ve been saying “We were shit” (pardon my Italian - why does it always have to be French?).

What’s more, we have gone for a pretty much “ideal” starting lineup barring injuries...I was afraid of more chopping and changing after years of being used to matches in weeks to come having an impact on a team picked for now, but it didn’t happen and this could very well be the 23 we’d put out if it were the final itself.

Unfortunately the likes of Luke Fitzgerald and Josh van der Flier are unavailable, but still it’s a starting XV with combinations all over which are used to playing together so once the leaders in the team can walk the walk after talking the talk, there’s much for us to hope for.

I’m not sure if this “pinning things up to the dressing room wall for motivation” is actually a thing that is done or if it’s just a metaphor, but for me, Leo Cullen could do a lot worse than serving notice to his players that the bookies have them as at least 33-point winners tomorrow.  Beat that, lads.

And I think they will.  Not that my son & his mate will care either way once I bring them to Eddie Rockets afterwards as promised, of course!

If you’re in two minds about going tomorrow, make it one and just go and shout for Leinster till you can shout no more.  Tickets are still available, click the banner at the top of this post.  You know it makes sense, and you know it’ll be a great day out.  JLP

PS Best wishes to Connacht, Munster & Ulster alike...the goal of 3 provinces in the Pro12 playoffs and all four in Europe is very, very doable and would be an amazing achievement for Irish rugby.