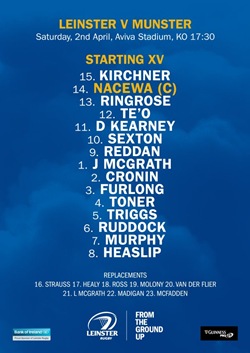 With the obvious financial benefits of getting all four Irish provinces in next season’s Champions Cup, it is surely the best thing for Irish Rugby that both Munster and Ulster win this weekend, so what say Leinster & Connacht fans do their bit by wearing their rival colours at the respective interpro derbies???

Doesn’t matter what the date is...no way were you ever going to believe I meant any of that! ;-)

Though my point about the four provinces is true to an extent, after two defeats on the trot Leinster can’t afford to make it three whatever the opposition, but most certainly when it’s at “HQ” against our good friends from up the N7.

Shane Horgan has been a good pundit from a technical point of view since he took up the mic but I never thought I’d heard him say anything really controversial until yesterday when he said on the Second Captains podcast that Ian Madigan looked “disinterested” against Connacht.  I wasn’t exactly singing the Bordeaux-bound outhalf’s praises in my writeup but even being outside the “mainstream” I wouldn’t have gone that far.

That said, on the basis of the last few starts for Leinster number 10s, I really do feel that if we are to win our 5th league title as the latest odds suggest, our chances really do rest on the amount of “on-pitch” minutes Jonathan Sexton can put in between now and May.

As the match in Galway showed, and indeed many other contests throughout the season, no matter how well-drilled we are on the defensive side of things, we can’t rely on that alone to win matches - points HAVE to be put on the board at a steady rate, particularly in the early stages, and there can be no doubting that Sexton is our best bet for doing that.

Munster for their part will be relying on a solid display particularly from their pack...the return of Ryan, O’Donnell and Stander will be key for them around the breakdown.  I have to say I raised an eyebrow or two at seeing van der Flier on the bench with Jordi Murphy starting at 7...I would have thought Jordi was the more versatile option to introduce in the latter stages.

But it’s not just in the forwards where the visitors can hurt us...should our defence be caught unaware at times they have plenty of talent in the likes of Zebo, Conway and Earls though our own back three is also well capable of doing some damage.

The bookies have Leinster by 6.  I’d be inclined to agree and I can’t see us winning by much more.  For me it’s Sexton, our settled centre pairing anchoring our D and our bench that makes me think we’ll have enough to be ahead at the end by 4-6 points.

As always here’s to a great occasion at the Aviva and I’m looking forward to meeting up with fans from both sides at the Sandymount Hotel afterwards as has become the norm over the years.  Hopefully the banter won’t involve bad weather or referee’s decisions and instead be about the rugby (and a Leinster win of course!). JLP