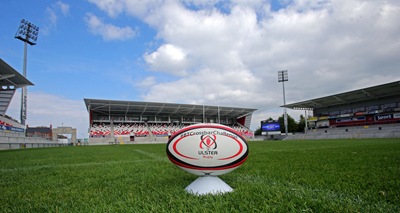 Ulster and Leinster Fans Given The Chance To Kick For Goal and Win £20,000

BT, Official Communications partner of Ulster Rugby, announced details of a massive £20,000 cash reward for the BT Crossbar Challenge Grand Finale which will take place in advance of Ulster’s clash with PRO12 leaders Leinster on April 30th in Kingspan Stadium.

Think you’ve got the skill and nerves to take to the field and walk away with a life changing £20,000? Selected at random, five match day goers will be challenged to kick for the crossbar from the 22 metre line in front of a packed Kingspan Stadium.

With no successful attempts from this year’s category exclusive events including; an over 50’s, a men’s only, a women’s only and an under 18’s event, BT’s blockbuster season finale event is open to all comers with registration details available through Ulster Rugby social media channels.

Match goers can apply to take part in the BT Crossbar Challenge by following Ulster Rugby’s Twitter & Facebook accounts and looking out for the #BTCrossbarChallenge hashtag.

Participants must be match ticket holders, terms and conditions apply. 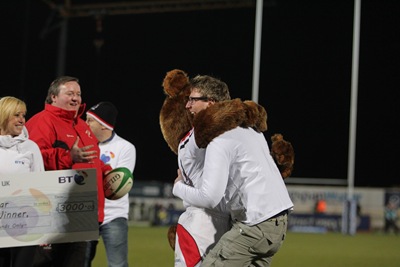 2. Participants will be selected at random by PSG Sponsorship (BT’s sponsorship agency)

3. Entrants need to be a ticket holder for the scheduled match to take advantage of the promotional place (no tickets will be supplied).

4. Kicks will be taken from or behind the 22 metre line.

5. To win the crossbar must be struck with a rugby ball kicked off a tee from or behind the 22 metre line without bouncing

6. The Participants in the Promotion must never have played any type of sport professionally/semi-professionally

7. One cash prize only. There will be only five attempts. No trial attempts will be permitted before the kick. If more than one participant hits the bar successfully the Conditional Return will be shared between the successful participants

8. The ball may be struck or propelled with the foot only.

9. Practice shots and retakes are not permitted

10. Lots will be drawn for the sequence of kicks prior to the competition.

11. There will be one kick per person with no practice kicks allowed.

12. Participants with medical issues or injuries of any kind may not take part and must disclose any such ailments in advance.

13. BT and Ulster Rugby are excluded from liability for any loss, damage or injury which might occur during participation in this competition.

14. BT clothing may be supplied but participants will need to bring their own suitable football boots and other necessary clothing to complete the competition.

15. All participants must sign an injury disclaimer prior to taking part.

16. An independent judge (positioned under the rugby posts) will indicate the result of the kick by raising either a red flag (unsuccessful kick) or a white flag (winning kick).

17. The judge's decision is final and no correspondence will be entered into thereafter.

18. Employees, agents, successors, and assignees of Sponsor, its advertising agencies and promotional companies involved in this Promotion, as well as family and household members of same, shall be ineligible to participate in the Promotion and shall be ineligible for any prize covered

19. The prize of £20,000 is payable directly to the winner within 30 days of competition completion.

20. By taking part in the competition, the winner grants BT the right to use and publish his/her name and picture in such media as BT may choose (including but not limited to the internet) for advertising and promotional purposes without additional consideration.