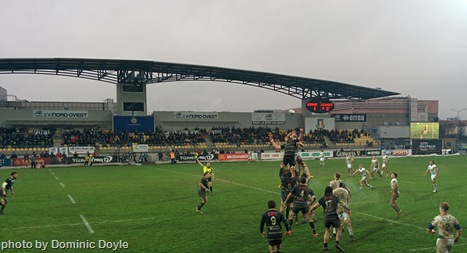 So there wasn’t 8 tries scored like the recent demolition of Zebre at home in the RDS, but a bonus point win leaves Leinster just one point behind Connacht the Pro12. Happy out, right?

Leinster took to the field looking fresh, well rested and somewhat similar to a ‘Daz’ advert. However, the white jerseys quickly became unrecognisable. Such muddy conditions were horrendous to play in and made it difficult to play expansive rugby.

Each try Leinster scored was impressive and well worked (seriously, watch the highlights).

Luke McGrath got the mud clad Leinster XV off to a good start with a Conor Murray style try, ferreting over the line past a dozing Zebre defence (5mins). This guy continues to grow in confidence and skill, keeping the tempo high throughout this match.

Shortly after the first came Leinster’s second excellently constructed try of the afternoon. With 3 options for McGrath, he sent Dooley through a gap all whilst Zebre had eyes on 2 dummy runners. Peter Dooley ran a great line, passing to Dominic Ryan who dotted the ball down under the posts 17 minutes into the 1st half. Isa Nacewa added the extras leaving the HT score ZEB 3 - 12 LEIN.

Young winger Adam Byrne demonstrated fantastic control steering the ball to keep it in play and create a try in the 2nd half, a brilliant individual effort from the 22 year old.

Finally, having won a number of penalties in the Zebre 22, a 78th minute drive splintered the Zebre pack allowing Dan Leavy to bag his first senior try and there it was. Bonus point secured in the nick of time.

Sure, there were lulls in Leinster’s attack and some decent passages of play from Zebre in the 2nd half but overall the Italians lacked intensity and were very disjointed. Out of fairness, the fact that club players had to be drafted in to replace Zebre’s absent internationals and injured squad members must be mentioned. Yet Zebre desperately lack the squad depth Leinster are fortunate to possess, even when their 8 internationals line out.

Leinster’s defence was, again, immense. Hats off to Kurt McQuilkin who since his return to the province has completely revitalised Leinster’s defence. With just 15 tries conceded thus far in the league versus Zebre’s 57(one of the worst concessions in the league), it is a wonder how McQuilkin has organised his defence in such an strong and aggressive manner. Leinster lost their shape a little at the beginning of the 2nd half but Zebre managed to break down the defence just once with flanker Federico Ruzza scoring a try for the Italians 72 minutes in.

Leo Cullen: "We probably lost our way a little bit after that coming into halftime. We settled back down again in the second half. It was just difficult to play. We're happy to have ground out a win and get the bonus point right at the very end as well, so quite a pleasing day."

Leinster have done the hard work and this bonus point could be crucial in later stages. A home semi final is the goal now and with a really tough run of matches coming up for the boys in blue, this was an encouraging match to watch.

P.S. It was heartening to witness Ian McKinley take to the field against the team he once played with. An inspirational character.