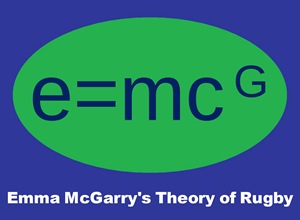 Wales’ biggest margin against an Italian side in 6 Nations history.

Wales started as they meant to go on in this match with the first of their 9 tries coming just 5 minutes in. I felt at times the Welsh played too elaborately which left them vulnerable to the possibility of the Italians scoring a soft try but time and time again Italy failed to capitalise on a number of Welsh handling errors, dropped passes and loose ball.

Wales were winning the aerial battle pretty consistently throughout this match but again elaborate passing was completely wasting any space being created. The simple things done well always trump the complex executed poorly. The Welsh frequently used the outside channels but their inaccuracy killed their attack on more than one occasion. However, none of this mattered against such a poor Italian side.

Italy continued where they left off after being humiliated by Ireland last weekend Wales hardly needed to organise their defence against Italy’s attack. Italy were stubborn but had little possession and asked few questions apart from the tries, which were isolated incidences in the otherwise suffocating Welsh defence.

Watching Italy play can be both heartening and disheartening but it is always frustrating. No one enjoys watching a match with zero competition between a giant such as Wales and an underdeveloped side like Italy, yet 2 second half tries from Italy shifted the dynamic if only for a short period of time. They counted for nothing except perhaps Italy’s pride.

I’ll use a word constantly over used in rugby - physicality (shudder) because that’s one of the only positive things I can say for Italy at the moment, they hit hard and not much else. Parisse does his best for them but the quality is not there for him to work with.

As Shane Horgan said “it’s a defence that don’t know what they’re doing against an attack that does.” Italy are a disjointed mess with little to no depth to their squad - a strong statement but the truth. Coming into this championship with a coach that’s as good as gone and a group of players ravaged by injuries that are undoubtedly sick of being hammered by the rest of us, Italy need a hero to sort this out from grassroots level and up.

Wales displayed where their strength lies

I was not as impressed by Wales as I had hoped I would be after the World Cup, had they played better against Ireland and England they could have been strongest in contention for this championship. Dan Biggar is without a doubt my first choice for the Lions 10 shirt as I’m sure he is for many people. He had a really good game scoring a sizeable chunk of Wales’ 67 points today. Biggar is currently the best Northern Hemisphere outhalf, you can’t deny he’s in better form than Sexton at the moment. Together with an excellent shift from Jamie Roberts they made sure Wales’ backs had plenty of confidence.

Roberts made his own contribution to the final score, thundering into the Italian defence to cross the white wash. Of course George North was his usual electric self, deservedly awarded Man of the Match for his efforts.

Ross Moriarty was brought on for Tipuric after his fall from a height during a lineout left him injured. I thought Moriarty covered fantastically, even bagging himself 2 tries in the process. One of which came in the 64th minute as a result of a well drilled lineout maul shifting the power down the narrow side.

To add insult to injury with the clock in the red and Italy exhausted, Wales went for a 9th try gathering Italy’s loose ball for Gareth Davies to bring this long, and at times tedious, match to a close.

Wales finished their 6 Nations on a high and Italy on yet another disheartening low. Plenty of Welsh players putting their hands up for a Lions shirt this year while Italy must again return to the drawing board to break this cycle of disappointment. New coach new team, right? We’ll see.