Six Nations Team of Round 5 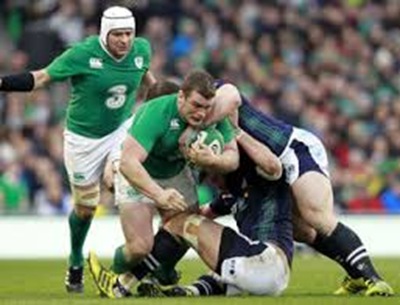 Another 6 Nations has concluded and the best side came out on top, England went back to being England  tough defence , good set piece , hard to beat and with an edge that was missing during the Lancaster administration . Ireland started slowly and improved , Scotland showed they can play when allowed to but still lacking some oomph up front , Wales still rely on the heavies when sometime subtlety might be the call and Italy had their worst campaign in a long time despite a promising opening weekend in Paris and France well are still an enigma . Was it a vintage 6 Nations ? Definitely not for me, but it had glimpses of potential which will help the tours to the Southern Hemisphere. Next year's tournament will hold more importance being a Lion's year but whomever is selected to go to NZ will have to improve to challenge the All Blacks . This past weekend again through up some standout performances , even a few in the blue of France.

15. Stuart Hogg (SCO) - His appreciation of two Irish front rowers in front of him and how to exploit it led to his scintillating try , a great all round tournament and easily the best attacking fullback in the Northern Hemisphere. Scott Spedding has his best game for a while too.

13. Jared Payne (IRE) - Vital to Ireland's defence, saves teammates blushes consistently , like to see used more in attack but does whatever is asked of him .

12. Jamie Roberts (WAL) - A little bit more passing and subtlety from the Welsh battering ram showing that he isn't just a one trick pony.

11. Virimi Vakatawa (FRA) - An industrious and fleet footed game from the Fijian , made lots of ground in attack and Jack Nowell will be relieved he won't see this guy again for a while.

10. Dan Biggar (WAL) - Like Jamie Roberts , showed better passing range and a return to form after a poor outing against England .

9. Conor Murray (IRE) - Apart from his loose kick to set up Hogg's try , Murray had a much improved performance ,got the ball away quicker from  rucks and scored another poacher's try. Machenaud's boot alone almost saw him get the nod but I expect more from a scrum half

8. Jamie Heaslip (IRE) - Heaslip comes in for a lot of flack , rightly so in my view,  but when he plays like this then there's no complaints, the frustrating thing is this is how we know he can play but these performances have been few and far between in recent seasons. More of the same in South Africa please.

7. Bernard Le Roux (FRA) - The French back row has been a poor shadow of former players like Benazzi, Magne , Betsen and Dusatoir and Le Roux is no classic 7 ( I know French 7s are usually blindsides) but he had a very strong effort against England, carrying well and not falling off tackled like some of his coherts previous games.

6. CJ Stander  (IRE) - Another bullish effort from the naturalised Munsterman. In general a well balanced and aggressive effort from all of the Irish back row but once again Stander relished the battle and will be interesting to see how the backrow is made up with the return of Sean O' Brien , Ian Henderson and Peter O'Mahony.

5. George Kruis (ENG) - Another lineout masterclass from Kruis , whos is benefitting hugely from his coaching staff,, hats off to Steve Borthwick for turning around a powderpuff pack into one which is performing again.

4. Maro Itoje (ENG) - Duck to water comes to mind when describing the international introduction of Itoje , athletic , aggressive can ball handle a prime example of the advantage of playing multi sports when younger. His future maybe on the blindside but who cares where he plays as long as he does.

3. Dan Cole (ENG) - Back to doing his basics well and a cheeky try as well for the Tiger , will come under pressure from Brookes and possibly Hill but he is the incumbent for now .

2. Dylan Hartley (ENG) - Guirardo would've made it 5 for 5 but his lineout work let him down in Paris. Hartley divided opinion and one cant help but feel there is a devil hiding inside but he has led England well and his scrum and lineout work has been a massive boost , good to see him receive the trophy after that sickening head knock.

1. Jack McGrath (IRE) -  Ireland's best player throughout the 6N for me and by some distance , a much improved scrummager and carries the hard yards well . His tackle count puts some to shame and one of first names on the team sheet for me.

Player of the Tournament - Stuart Hogg (SCO) - A great series of games from the Glasgow man , improved under high ball and defensively but his play with the ball in hand was heart warming in what was a  overall 6N

Best Newcomer - Maro Itoje (ENG) - He just pips CJ Stander . Itoje's influence for a young man in all aspects of 2nd row play belied his age and showed if you're good enough you're old enough . Probably an M3 BMW as opposed to a Vauxhall Viva now.

Try of the Tournament  - Jamie Heaslip's finish of a fantastic team effort  at the end of the first half in the Ireland vs Italy encounter.

Team of the Tournament