Six Nations Team of Round 4 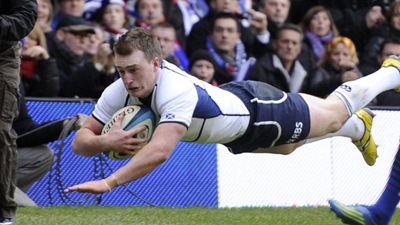 So the title is decided but the slam is yet to be won , another impressive outing for Eddie Jones' side where a shaky last 10 minutes almost saw 70 minutes of control undone . Ireland swatted aside a poor Italian effort , does it tell us much, not really , but you can only beat what is put in front of you and 9 tries is not to be sniffed at , the last quarter will frustrate Schmidt no end letting in two soft tries and taking the foot off the pedal a tad. Sundays game at Murrayfield was the pick of the 6N so far with both teams ambitious giving the ball plenty of air . Some positions had clear stand out performances whilst others proved more difficult to decide upon

15. Stuart Hogg (SCO) - Easiest decision of the weekend selections , a thoroughly excellent all around display from the Glasgow full back , and a lovely flick on for Visser's try capped it all off.

14. Anthony Watson (ENG) - Workrate is ever improving to add to his impressive test try scoring strike rate . Elusive and has pace to burn . Andrew Trimble's efforts were not a million miles away rom selection on the wing

13. Duncan Taylor (SCO) -  Another Scottish back transferring club form to test arena, has had an impact in each game and probably would've finished his try in spite of Laidlaw's little tug on a French jersey. Excelling under Cotter's more expansive gameplan.

12. Robbie Henshaw (IRE) - Growing with every game , his defence is solid misses the odd tackle but ball in hand is a menace , needs to curb his kicking and make better decisions when to kick. Will only get better, be it at 12,13 or 15. Owen Farrell was unlucky to miss out after an impressive game vs Wales

11. Tim Visser (SCO) - His opposite wing Tommy Seymour has been in the limelight but the big Dutchman had his best outing in a Scotland jersey for a long time culminating in his try from Hogg's adventurous flick.

10. Jonathan Sexton (IRE) - Still to produce a game where both his kicking an passing are working to their best but the opposition's poor quality allowed his poor kicking to go unpunished , Scotland will not be so generous . Still the premier fly half in Europe getting a back line moving , his dummy/delayed pass to Trimble in lead up to Heaslip's first try was masterful and a great piece of decision making .

9. Ben Youngs (ENG) - A frustrating player to watch at times but an influential outing for the Leicester Tiger , was a threat ball in hand and was a great link between a powerful pack performance and an ever improving backline.

8. Taulupe Falatau (WAL) - Once again Falatau stands out for Wales , even in defeat , in the battle of the cousins only one winner here with Vunipola kept quiet whilst all those around him crumbled in the opening 70 minutes , Falatau showed enough in all aspects to continue his ascent amongst the best no.8s playing today.

7. John Hardie (SCO) - A true openside a bit of a throwback amongst some of the monster backrowers playing today. Excellent footwork always sees him make yards ball in hand and does what any good openside should do , quicken his own side's possession and slows down the oppositions.

6. CJ Stander (IRE) - A statistician's dream , ball carry after ball carry , hard yard after hard yard, to continue his rapid development needs to add soft hands to his hard head but with Sean O Brien on the sidelines his carrying is vital for the Irish gameplan. Chris Robshaw is very unlucky not to grab the 6 shirt after possibly his best game for England in years.

5 . Richie Gray (SCO) - A fine return from the elder Gray on Sunday approaching his best performances once again , influential both ball in hand and in the lineout. If he improves his tackling (which can be suspect at times for a top quality lock) another Lions tour will be in the offing .

4. Maro Itoje (ENG) - The future is now , an athlete with a great rugby brain everything is there for him to succeed , let him play and cause havoc and watch him grow , frightening potential . Along with Kruis can form a 2nd row for England to rival the best.

3. WP NEL (SCO) - The rock on which Cotter is building his church . Vital to the resurgent Scottish team and about as important to their scrum as Ross is to Ireland's . Adding an ever improving ball carrying game to his scrum and lineout work

2 . Guilhem Guirardo (FRA) - Why do I pick him every week , especially when it takes at least 4 efforts to get his name correct. Simple really , he is the most complete hooker in the northern hemisphere right now , does his basics excellently always a willing ball carrier always makes yards and is what a captain should be, leading by example. The Dylan Hartley revival also continues

1. Jack McGrath (IRE) - Cian who ?  Another all action outing from the Leinster man , and surely in pole positon of the loosehead shirt even if Mr.Healy is fit again soon. Ireland's best player so far for me in the tournament .