Six Nations Team of Round 3 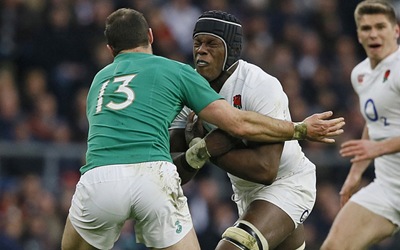 Another fascinating round of games . We started with the Wayne Barnes show at Cardiff on Friday night where again it was tough watching , physical for sure but lacking in class again , probably a good way of describing the 6 nations . Italy and Scotland threw together a game easier on the eye but is that because it was two poor teams with nothing to lose ??

The ''entertainment'' concluded on my own doorstep on Saturday evening where England and more specifically Billy Vunipola pummelled Ireland into submission. Some people continued their excellent starts to the 6 nations while others are falling by the way side . Here is my selection for round 3

15. Stuart Hogg (SCO) - Getting better and better as the tournament progresses , Ireland beware of kicking too much possession to a player who is a constant threat .

14. Tommy Seymour (SCO) - Another try for a player who is impressing the rugby public across the board .

13. Robbie Henshaw (IRE) - Showed enough with limited breaks to prove he is wasted at 12 , either at 15 or 13 his running is powerful and a game breaker, edges out Campagnaro who had another strong outing.

12. Duncan Taylor (SCO) - Solid as a rock in defence and  an excellent facilitator in the ever improving Scottish midfield. Garcia was unlucky to miss out .

11. Jack Nowell (ENG) - Gritty effort once again from the tattooed Cornishman. May have saved the day with his cover tackle on Henshaw , a player who gets better with every international.

10. Jonathan Sexton (IRE) - Not perfect by any matter of means but still the best fly half in the Northern Hemishpere. Offers a threat ball in hand that Dan Biggar still lacks , love to see him play on the front foot soon , needs more go forward from his pack.

9. Gareth Davies (WAL) - A nuisance to defend against at the ruck , lightning feet , at times labours a bit too long on the ball but Wales are blessed with some depth at the position. Edges out another solid game from Laidlaw

8. BIlly Vunipola (ENG) - A monster game from the Saracen. Still far from the finished article and can protect the ball better but always carries 3 or 4 defenders with him , his bulk and power help when going from a standing start. Along with his cousin Faletau their battle in a few weeks will be intriguing.

7. Sam Warburton (WAL) - John Hardie has a strong game in Rome and JVDF got better as the game went on in Twickenham but the Welsh skipper relished being back in his favourite position on Friday evening . His breakdown work slowed down even further the ponderous French attack and his tackle count is always one of the best .

6. John Barclay (SCO) - An all action effort from the Scarlet . Still prefer to see him in the 8 jersey but in attack provided lots of go forward and has an underrated offloading game, his try was just reward for his play on the day.

5.George Kruis (ENG) - A player who has made the team 3 weeks in a row , controls England's lineout well and has added a powerful carrying and defensive game this season . Impressive

4. Maro Itoje (ENG) - England have never lacked for lock but rarely have they had one as athletic , his future maybe on the blindside but his debut start shows much promise from a player of whom much is expected.

3. WP Nel (SCO) - Ruined Italy's scrum and possible motm performance with a silly yellow card at the end . All in all has been a great find for Scotland and is vital for them in the near future .

2. Guilhem Guirardo (FRA) - Another towering performance from the French hooker , does his job in the tight is an improved lineout thrower and his workrate puts his teammates to shame . Scary to think how bad France would be without him.

1. Rob Evans (WAL) - Growing with each performance , still a long way to go in the scrum for me but around the park has some soft hands and clears rucks and tackles with aggression .