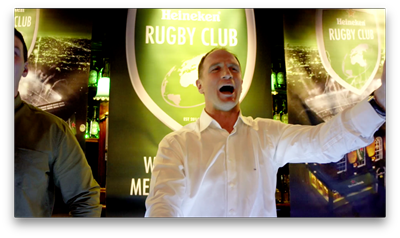 Unsuspecting rugby fans recently found themselves at the centre of an unforeseen scenario in a Dublin pub on the day of the England v Ireland Six Nations game. As the old rivals clashed in what was billed as one of the defining matches of this year’s tournament for both teams, HEINEKEN, with the help of rugby legends Denis Leamy and Mike Catt, set up the elaborate hoax and put supporters to the test… with some highly entertaining results.

Visiting a busy pub in the heart of Dublin to watch the big game, fans instead found themselves at the centre of an elaborate setup, one that forced opposing supporters onto the same side… at least for a short time.

Rugby fans the world over are known for embodying the great virtues of the game; singing the songs of one’s team is one of the oldest and best-known traditions of the game. But, what would happen if rival fans were tasked with joining forces to sing together in order to achieve a common goal?

HEINEKEN Marketing Manager, Karl Donnelly, said: “HEINEKEN has a deep-rooted commitment to rugby and Heineken Rugby Club is our newest, most ambitious effort ever to facilitate fans in a way that’s never been done before. Bringing fans together by providing aspirational moments for them means supporters now have a fresh, new way to enjoy the action on and off the pitch.”

Through Heineken Rugby Club we celebrate and reward real supporters who make the game what it is.

Join us at www.HeinekenRugbyClub.com now. 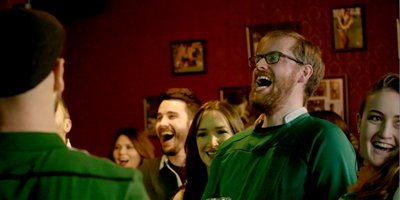