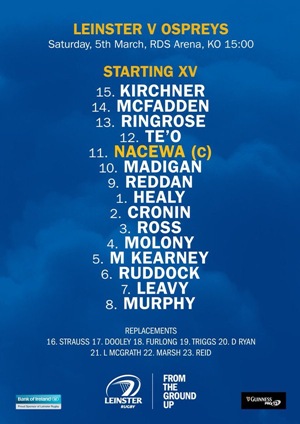 Robbie Henshaw received a lot of credit for his performance at outside centre at Twickenham and with it came a suggestion that he assume the jersey permanently.  With his arrival at the RDS set for next season, I dare say Leinster fans hope that isn’t the case.

Leo Cullen has done a lot of squad rotation this season, but in recent times, the one key area he has been able to bring much continuity has been in his centre pairing with Ben Te’o and Garry Ringrose working well together and should they be able to see out the season together, Henshaw could be well set to slot right in at 12 which would have to be good news for both Cullen and Joe Schmidt.

And as the business end of the season gets nearer, while the road Is definitely going to be tougher that's not such a bad thing for Leinster because matches like this one against “Those Pesky Birds” will give us just the kind of test we need ahead of the playoffs in May, assuming we make them of course.

Despite being slap bang in the middle of a Six Nations campaign this is an incredibly strong squad we’re able to put out all round.   Even the youngsters in the team like RIngrose, Molony and Leavy can consider themselves there on merit.

The Ospreys are still reeling from their try that never was in Galway last weekend...ok, it was  bad call but pretty much every team in the league has suffered a similar injustice at some stage and with four titles to their name maybe they should be asking themselves more why they badly need the points at this stage of the season?  Might serve them better.

One thing is for sure, they will be coming to Ballsbridge to give us a good game and no doubt they will be smarting from the defeat we handed them in Swansea not too long ago.  With Dan Biggar away Sam Davies has done well at ten for them and the occasion shouldn't faze him one bit...we need to be on our game for the full 80 minutes.

When I say “on our game”, more than anything else I mean in our set pieces, particularly our lineout ball.  How many times this season have we worked ourselves into attacking positions only to literally throw them away by way of a botched dart or call?  While we have grown accustomed to our defense working well to keep our opponent’s score down that won’t be much use if we can’t put away our own chances.

Ian Madigan could definitely do with a good outing.  I have always been a fan but he doesn’t seem on top of his game in recent times yet with Eoin Reddan and Luke McGrath set to accompany him in the halfbacks he is bound to have a good tempo throughout to play the game the way he wants.

This match, in the prime Sky Sports time slot this weekend, is a perfect opportunity for Leinster to put the European disappointment in the past where it belongs and show the league we’re the team to beat for the title.  The bookies have us winning by 7 points; I’m going to back us to do a bit better, 8-10 though it should take a late score to create that margin.

Here’s to some good D4 weather but even if not, I hope the Leinster faithful still show up in their usual numbers for arguably the league’s biggest cross-national rivalry.  JLP