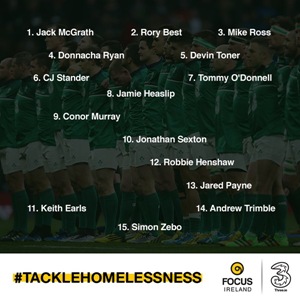 I hear a lot of people trying to point out why this is a “big match”.

We need the ranking points for RWC2019, some say.  We need the money for finishing third, others say.  We need a good performance ahead of our three-match set in South Africa.  Victory would be impressive as the Scots are on the up.

All of the above may be true, but can we be clear on one thing.  If you’re an Irish rugby fan, then it’s always a big match.  There should be no need to talk it up.

The “fifty-burger” against Italy was definitely a pleasure to watch, but as annoying as it was to hear some try to pour water on it (like honing in on the two Italian tries instead of the nine Irish), we do have to put that behind us now.

“Stern Vern’s” Scots ARE on the up and they will be well keen to win three in a row in this tournament for the first time in, well, a long time so we can go into this match knowing they’ll be fired up to give us a challenge.

But remember...it’s going to be a challenge for them as well.  If we can settle into the same kind of all round standard we showed in our early possessions last Saturday, the result may not be a blow out, but we’ll certainly have the ability to put more points on the board than our opposition.

Tommy O’Donnell comes back into the starting lineup, an interesting call.  Not that I have anything against his inclusion but I would have thought Munster needed him more this weekend (and Irish rugby for that matter given we’re trying to get four provinces in Europe for next season).  I have absolutely no doubt that the coaching staff have made it clear to both himself and Josh van der Flier that they have parts to play in the setup going forward.

A big key to this match will be the scrum, and in turn how Monsieur Gauzere interprets it.  Glasgow may be the reigning Pro-12 champions but it’s an all-Embra front row that has caught the eye in this year’s Six Nations and not for the first time we’ll need at least 65 quality minutes out of Mike Ross to keep this area steady.

Then there’s our defence.  Enough Irish observers go on about its liabilities (namely a general tendency to be narrow and individuals like Simon Zebo) so you can be sure the Scots will have noticed that as well.  There is certainly more than enough quality in their backfield to make the most out of any mistakes on our part, but when it comes to how we cope without the ball my thoughts keep returning to our “Henshayne” centre pairing and I begin to feel a lot more confident.

The bookies have us winning by 7 points...I wonder when was the last time they forecast a single digit home victory for us against these particular visitors?  I feel the final try count will be two each but also that superior place kicking and a higher penalty count will give us a win by 10 to 12.  But only if we can get ourselves on the front foot in the opening 15 minutes.

Another thing we’ll need in the early stages is a massive show of support from the crowd so let’s be sure and give it to ‘em.  Come on you boys in green, what say we end the 2016 Six Nations in style.