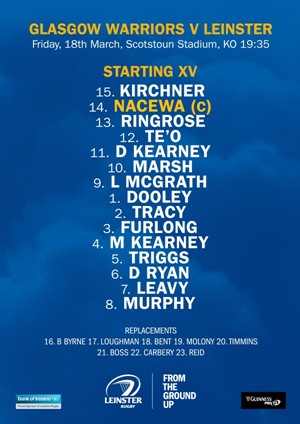 Where better for a round 9 game than sandwiched between round 17 and round 18 on a Six Nations weekend.  There are upwards of 600 hours of rugby this weekend, and it may be the last we see of the Six Nations for another year, but don’t forget about this one.  For a while now Leinster have been stuck behind Connacht with a game in hand looming, well here it is.

Leinster find themselves two points behind Connacht, a win at Scoutstoun would see Leinster ahead of the Westeners, and well positioned with only 5 rounds left.  This is the first of Glasgows two games in hand, though they may look a long way off the play offs, a win here, and another game in hand against Zebre,  the Warriors are still very much in touch to get into the top four and retain their title.

It’s a crucial game for both sides.  These games in hand come with an asterix for Glasgow, as they’ve only played one less than 5th place Munster.  They play Cardiff tonight, a win puts them level on points with Ulster.  In terms of the run in it’s a mixed bag for Glasgow, they play Zebre twice and travel to Treviso, but also have to go to Connacht, and Scarlets, as well as host Ulster.  The first of three home games left for the Warriors is a must win, particularly because of Edinburghs good form this season, which could see them take the Scottish Champions Cup spot.

For Leinster there are potential landmines everywhere.  All three provinces, two of which are away games, and a tricky game against Edinburgh, before finishing off at home to Treviso.  A game in hand doesn’t mean anything if it’s not won.

Form wise, it’s pretty even.  Glasgow have recovered from a poor start to the league campaign (understandable considering they were missing over 20 players to the World Cup).  They have won their last three.  Since a 23-13 loss to Dragons at the end of January, Leinster have overcome Zebre, Cardiff, Zebre again, and Ospreys.

Leinster make 8 changes for the game.  The most notable is the return of Dave Kearney.  Having been injured, it’s fair to say the only thing that’s kept him out of the Ireland squad this weekend is a lack of game time.  Leinster have a brand new front row this week, Peter Dooley, James Tracy, and Tadhg Furlong all start.  Personally I’ve been nothing but impressed with Tracy since his debut earlier in the season, maybe his name will be alongside Ringroses on the list of young uncapped players that should be taken on the tour of South Africa, but like Rongrose.

Having been in the Ireland squad for the World Cup and the Six Nations, this is an important test for Furlong to stay in the mix, particularly with Finlay Bealham making his debut last week.  Jack Carbery will likely make his debut for the senior team tonight, he kicked 14 points in Leinster ‘A’s defeat to London Welsh last weekend.  The T’eo and Ringrose combination has worked well in recent games. I’d like to see Reid and Ringrose start together at some stage considering Te’o is leaving, but his current form can’t be doubted.

As for Glasgow the big news is Rory Clegg is back from Oyonnax and is immediately in the starting line up.  The Warriors also welcome back Adam Ashe and Tyron Holmes from injury.  Leone Nakarawa moves to the second-row from number 8.

Leinster haven’t won at Scotstoun since that incredibly boring day in November 2012, 6-0 was the final score, that was the only time Glasgow have been kept scoreless at home in the league.

In terms of improving on the last game, Leinster need to start better and finish better.  Ospreys were all over Leinster for the first 10 minutes, another poor start like that and you’d imagine Glasgow will build a lead.  Game management is another issue, kicking the ball away when you’re 3 points up in the last 90 minutes of the game is jumping up and down on the tight rope, and really should have been punished.  Leinster should have been well ahead at that stage, but a sluggish start to the second-half saw Ospreys back into the game.  Hopefully after this weekend we don’t have to talk yet again about an Irish not building a lead and getting punished for it.  That can’t happen here.  It is pivotal Leinster take control of the game early on.

A must win for both sides kicks off at 19:35.  A win here and Leinster are top with all things equal.

Keep an eye  on Soundcloud for our podcasts: