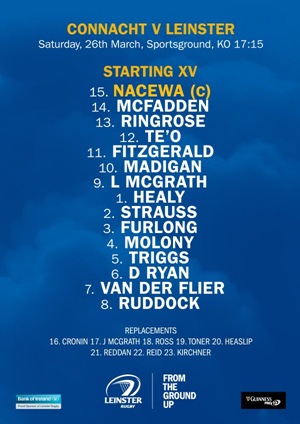 I’m pretty sure that if rugby were played on paper I wouldn’t be bothered harping on it all the time.

This means the age old method of judging teams simply by their starting lineups is pretty much a waste of time any week, but it particularly applies for this massive top of the table clash at the Sportsground.

Man, that’s a strong Leinster 23. Even before you get to the bench.  A back three packed with experience including the returning Luke Fitzgerald.  The extremely settled “Ben & Garry” centre pairing.  Strong up and comers throughout the squad like Luke McGrath, Josh van der Flier and Ross Molony.  Then you get to the bench and see all five forwards who are hot off the presses from the Six Nations.

But it only takes one glance at the Pro12 table to remind you that this is to be by no means an easy contest for Leo Cullen’s men.  I compared Connacht’s Pro 12 campaign to that of Leicester City in the English soccer Premiership a while ago and I stand by that...what’s more, it is meant as nothing less than the highest possible compliment.  A team nobody considered to be in title contention when the season began has a first-placed finish in sight with a few matches to go.

And this has been achieved thanks to the belief that Pat Lam has been able to drum into his squad.  I saw it for myself back in November when their reserve team the Eagles came to Dublin to play our As and did anything but make up the numbers, putting in an amazing 80-minute display which played us off the park.

There have been seasons in the past where the Westerners have shown promise up to this point in the season only to fall away during the Six Nations...not so this time around.  Forget about sneaking into the European places or the Top 4...this is an outfit capable of winning the grand final in Murrayfield.

Now, having said all of that, I am very much expecting a quality display from Leinster.  It is badly needed.  That second half in Scotstoun was an absolute horror show and hopefully Isa Nacewa’s body language at the end was a sign that they won’t tolerate a repeat performance.

There are tasty looking match-ups all over the park, but for me the most interesting battle will be at scrum-half.  For all the talk about Leinster looking for a southern hemisphere 9 it is clear that in Luke McGrath we have someone with the ability to make blue starting jersey his own if not the green one as well down the line.

But if I were to have one criticism of his game, and it’s only a wee one, it would be about his tendency to throw his arms up at virtually every ruck hoping to get a penalty.  Of course he can work towards getting to a stage where he can pick his moments to appeal carefully, and with Nigel Owens holding the whistle in Galway, it could very well be a good place to start.

That point aside, both sides have strength in both pack and back-line and how they are joined together by McGrath and Kieran Marmion could be pivotal.

I’m going to predict a Leinster victory by 3 points.  The bookies have the home side by a measly point, but I’m banking on the Leinster bench to come on and keep a determined home side at bay.  We’ll need to put a decent amount of points on the board in the early stages, and I suspect this is one of those matches where we will be debating a controversial result-deciding incident afterwards.

Most importantly, isn’t it great to see not only two Irish provinces battling it out for top spot,but for it to be happening in Galway.  This promises to be an epic encounter, and as Leinster fans we can be under no illusions as to where the neutrals’ loyalties will lie!  JLP

At The Sportsgrounds. Live on TG4 /Sky Sports KO 5:15pm