Leinster Rugby have this morning confirmed a further contract extension and a new signing for the 2016/17 season.

Jamison Gibson-Park has been signed from the Hurricanes and will join Leinster in time for pre-season training on 1st July.

The 24-year-old scrum half has played for the Maori All Blacks and was part of their squad that toured England in 2012.

Leinster have also confirmed that Hayden Triggs has extended his contract and will remain with the club for the 2016/17 season.

Commenting on the news, Leinster Rugby Head Coach Leo Cullen said, "We are very happy to have secured two key signings ahead of next season.

"Jamison, for a young player, has a wealth of experience behind him already and was an ever-present in the Blues team last season in Super Rugby before signing with the Hurricanes.

"I think he will bring great competition to an area where we are well serviced with the likes of Nick McCarthy and Charlie Rock pushing the senior players hard already.

"Hayden has been influential since joining us earlier this season and we are probably only now seeing the best of him as he unfortunately suffered that ankle injury against Bath in the Champions Cup.

"In 14 games for us to-date we have seen the leadership that Hayden brings to this team as well as his excellent work ethic with and without the ball.”

Leo Cullen also confirmed that Leinster hope to finalise the remaining squad positions and the full Academy roster for next season in the coming weeks.

Below is a post we published back in March… 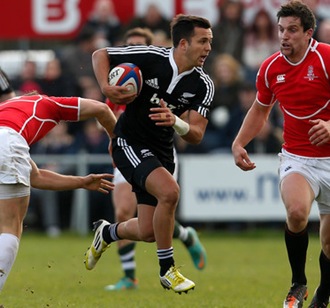 Who's this Jamison Gibson-Park then?   A look at Leinster's latest target.

Leinster needs a scrumhalf. Of our three senior petits générals, two surely aren't long for this world. People have started talking in hushed tones around Isaac Boss and Eoin Reddan. Their families have already decided on a design for their mass cards. Either might last another season, but at this point senile dementia is as much a danger as their legs giving out. Nick McCarthy looks as though he might well make the step up in time, but meanwhile Luke McGrath needs some competition for the next couple of years.

El Swervo says he can't talk about it because “nothing has been finalised.” In the grown up world of sport this usually means that everything's done and dusted, but with the MI5-level secrecy that prevails in Irish rugby officialdom (where the media is viewed as something between Pol Pot and cancer) it could just as easily mean they've never heard of the lad.

In that, they'd have something in common with me – look, I won't pretend to have an in-depth knowledge of Super Rugby squads. Despite this, and the fact that Gibson-Park might never actually see this side of the equator, the slightest whiff of a transfer is enough to get me all hot and bothered. So here's what I've been able to find out for you from a quick google hours of painstaking research.

Gibson-Park grew up in Great Barrier Island and Gisborne. No-one in this part of the world knows or cares what those places are, so on to the rugby. He joined ITM Cup side Taranaki in 2012, before going on to be signed by the Blues in 2013. After twenty-nine Super Rugby appearances over three seasons for them he signed for the Hurricanes this year, making one appearance in the league so far. He's also represented the Maori All Blacks eight times.

Is he any good though? Youtube hasn't been kind to us. There are a few ITM Cup match highlights and a couple of fairly bashful interviews, but the only real clip of note is poor old Jamison stumbling over his own feet while his pack form up for a scrum. How the hell are we supposed to draw our ill-informed conclusions now? Enter freakishly long rugby guru Murray Kinsella to save the day yet again. He, in His wisdom, tweets that Gibson-Park has a “nice pass” and “Kiwi savvy”, but isn't good in contact. That's good enough for me then. We don't question The Murray.

Anyway, it sounds from that as if we're talking about a like-for-like replacement for Eoin Reddan. Now while we definitely need to find a scrumhalf fairly sharpish, I'm not sure that this is the answer. As a high-tempo, sniping SH Reddan already seems to have a natural successor in Luke McGrath. Signing a second player in this mould could indicate that this is the style of rugby Leo wants to pursue, but for me the Reddan-Boss dynamic works because of their differences. Boss's more physical, tactical game just suits certain opposition better, and often the change in pace when one replaces the other discomfits opposing defences.

That said, I'm not going to argue with eight NZ Maori caps. No full All Black cap though, and of course that's another key consideration – Te'o's move to Worcester has opened up a project player spot. Were Gibson-Park to join at the end of the Super Rugby season this year, he'd be Irish qualified in time for the 2020 Six Nations. As he's just turned twenty-four years old he should be in his peak at that point. Now I won't wade into the national eligibility debate here (okay I will a bit, three years is just too short), but this looks like a good move from an Irish rugby point of view. And while we shouldn't try and base our transfer policy around what the IRFU wants, at the end of the day they're the money. Them what pays the piper calls the tune and all that.

On the balance I hope this one goes through. Lord knows we need a bit more excitement around the province with no European knockouts to be disappointed by, and the prospect of a nippy, slick-passing Kiwi coming over to shake things up fits the bill. It also might help dull the memory of the last few transfers, which haven't exactly gotten the blood racing (apart from in the five minutes between Ben Te'o finding form and Ben Te'o announcing his imminent departure). Plus with a surname like that, Mr Gibson-Park should have no trouble fitting in in Ballsbridge at all.

Cathal Burke O'Leary (@Cathal_OLeary) Wexfordman who's roughly as qualified to write about rugby as you are, but is going to do it anyway.