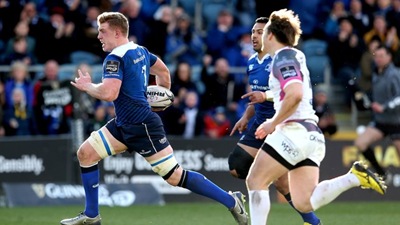 I told myself at full time I wouldn’t be tempted by the historical nature of the final score but once the above acronym popped in my head I decided I might as well run with it!  To save you time hunting through the rest of this piece for more references however, there won’t be any, at least not intentional.

Last week I touched on a phenomenon which I call “YouTube punditry”, whereby the performance of a particular player is judged solely on a single highlight-reel play, more often than not a line break or a bone-crunching hit.

This method works a lot better in soccer, where a player can be quiet for 89 minutes yet produce a moment of genius that can actually win a game.  In rugby however, while re-showing pieces of brilliance is essential for helping promote the sport, when it comes to overall analysis there are several other categories to consider before making an educated assessment.

If I were running an equivalent site to HarpinOnRugby only rather than concentrating on Leinster I was a fan of Top 14 outfit Union Bordeaux Bègles (not sure what I’d name the site...probably something wine-related….”La Vigne du Rugby” maybe?), my main focus of course would be the fact that my team was well into the playoff places this weekend after an Adam Ashley-Cooper hat trick helped them to a bonus-point trouncing of Oyonnax.

But given I’d be a committed fan of the club I’d also be doing what I could to keep tabs on players due to arrive next season, like of course Ian Madigan.  Who did Leinster play at the weekend? I’d say, in French of course.  Ospreys, eh?  Oh, I see they won 19-16...let’s see...can I find some footage of the try?

Well if that was the only clip I got to see of the match I’d be quite impressed with Madigan’s contribution...off a scrum in his own half he took a step which put his opposite number Sam Davies on the floor, then he sprinted into the space before finding team-mate Fergus McFadden who provided further strong running and a well-timed final pass to Dan Leavy who cantered over the line.  Ooh-la-la!  And how were his place-kicking stats by the way?  5 out of 6, keeping him well in the race for a second Rhino Golden Boot award in a row?  Magnifique!

But does that tell the full story of his performance?  No.

Regular readers of this site will know I’m a big fan of the player and I wish him all the best when he makes his move to France.  All I’m doing here is pointing out that over the 80 minutes this was far from his greatest performance and in actual fact it highlighted what he’ll need to work on if and when he gets a regular run in the 10 jumper.

The main problem was his kicking from the hand.  The game wasn’t a minute old when he put a grubber through that needed to go somewhere an Osprey player wasn’t yet it went straight to one, and this was pretty much a pattern throughout the match, whatever the intended height of the kick.  Once at a critical point his kick avoided everyone altogether and out on the full bringing play back and keeping the visitors in the hunt.

Having said that, the try wasn’t his only positive contribution.  Even though we only scored one try this week as opposed to four last, the overall game plan was much better this time around.  Our centres were coming on to the ball from much deeper and this gave them a much better platform to show what they can do - Garry Ringrose had some impressive carries though it was man of the match Ben Te’o with a whopping 92 metres gained who stole the show thanks to about a gagillion strong hand-offs.

But the fact remains that we were unable to build on a handy 16-3 halftime lead and not for the first time this season went a long period without scoring, relying mostly on our defence to bring home the victory.

Actually on that subject of the defensive side of things, the “YouTube punditry” rule can also apply.  If your only clip of the match was Dan Baker’s try in the second half you’d be quickly pointing your finger at Hayden Triggs for poor tackling technique - while it’s true the Ospreys number 8 had a good game running with the ball overall, I doubt even he would have expected to get to the Leinster line so relatively easily.

Yet that is the point.  There was but one mistake in the Leinster line of tackling throughout.  On this occasion it led to a try, but on most occasions it doesn’t, often because we’re organised enough to be able to scramble and snuff out the danger.

So I guess what I’m trying to say is that if we are to live up to our record in this league at playoff time (which, by the by, is now the best winning record in all three domestic competitions) we’re going to have to keep our defensive standards as they are, while finding a way to put a few more points on the board.

Of course the close result was not brought about merely by what Leinster did or didn’t do on the day.  “Those Pesky Birds” may not be having the best time of it when it comes to injuries or results, but every frequenter of the RDS knows that they never come to Dublin with anything less than a willingness to play for the entire 80 minutes, and this was no exception.

Missing their internationals was something both sides could point to, but the visitors were also without key players in reserve, not least of which was Sam Underhill who impressed when we played them in Swansea after Christmas.

Still...in the likes of the returning Rhys Webb, Dan Baker, Jeff Hassler and Sam “Play Through The Pain” Davies (seemed to have sore ribs in the second half) they made this into a very tough challenge for the home side, but in the end they couldn’t turn 56% possession and 59% territory into any more than a losing bonus point, which leaves them short of the European qualifying spots.  I sure won’t be ruling them out from making it, mind you.

But another Welshman was involved in the proceedings, namely referee Ian Davies, thus bringing us back to the Pro12’s biggest elephant in the room, officiating Irish/Welsh matches.

This cannot go on.  I want to harp on the way Davies gave the Ospreys a warning in the first half only to penalize them in the second without even a hint of producing a card.  I also want to point out a couple of downright baffling penalty awards against Leinster players.  Ideally, I’d like to do that without making it look like “he only did it cos he’s Welsh”.

The fact remains, a referee in a senior cross-border competition should never be placed in that situation and I reckon World Rugby should step in and help provide funding for external refs to join the Pro12 circuit, not just for one-off matches but for an entire season.

One Leinster player I’d like to single out is Dan Leavy.  Josh van der Flier may have had a stand out season but I’m telling you, despite being a year his junior, Leavy isn’t that far behind and it would seem Leinster now have two “natural 7s” (hate the phrase but alas it’s not without meaning) to not only back up Sean O’Brien when he’s fit but also to force Leo Cullen into moving his back row around to accommodate them.

Going back to Ben Te’o for a moment...if he continues this vein of form to the end of the season, no doubt the “why didn’t we break the bank to keep him” narrative will grow stronger among some Leinster fans.  If these decisions were made in the sanctuary of the off-season, then maybe something could have been done.

But when the haggling takes place before Christmas I don’t see why we should have our hand forced by Premiership money especially as Robbie Henshaw’s imminent arrival was a badly-kept secret even then.  What say we just accept he’s gone and hope he leaves with a league winners’ medal.

Finally - to Leinster’s propensity to box kick, as this seems to be a subject that annoys many fans.  For me it’s all about what you consider to be a successful execution of the move.  If you think it only works if we win back possession then yes, we do fail more often than not.

But if, like me, you also consider a success to be when the catcher is legally tackled and driven back (demonstrated in this match more than once by the growing-in-form Fergus McFadden) then we did a lot better than many suggest with the tactic.  It certainly didn’t work every time but when you have a defence as solid as Leinster’s I certainly can’t fault our logic in repeatedly putting so much faith in it.

There are still a good few tough challenges ahead this season - reigning champions Glasgow plus all three provinces among our remaining opponents - yet all in all after such a disappointing European campaign, it’s good to see the 2016 Leinster Rising continue.  OK, maybe that one was intended.  JLP

Ironic first outing for these boots and we won 19-16. Remembering those who died in the Easter Rising