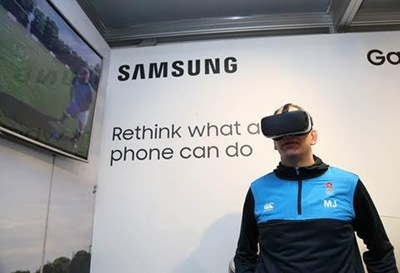 Three lucky England Rugby fans were given a day to remember at the Samsung Gear VR Experience, Twickenham Stadium ahead of the England v Ireland RBS 6 Nations match.
Fans were able to test their rugby skills through a Samsung School of Rugby game housed on the new Samsung Galaxy S7 handset and Samsung Gear VR headset in a dedicated pop-up in the West Fan Village, but for three selected participants their virtual experience turned to reality when England legends Martin Johnson and Lawrence Dallaglio delivered a special surprise.

Unbeknown to the participants, the stars of the recent Samsung School of Rugby campaign were waiting in the wings and as three lucky fans stepped up to take part, Martin and Lawrence crept in and took their positions ready to surprise them.

The fans were then left open-mouthed as they removed their headsets to reveal the towering figures of Martin Johnson and Lawrence Dallaglio, who then joined them and others for selfies and conversations at the experience.

Lawrence Dallaglio said: “We had a lot of fun filming the Samsung School of Rugby campaign last year so it was great for Martin and I to be able to bring a little bit of that to the home of rugby at Twickenham.  It was great to see the expressions of some of the surprised fans as they took off their virtual headsets to be greeted by myself and Martin.”

Benjamin Blanco, Head of Sport and Entertainment Marketing, Samsung UK, added: “This year more than ever we want to connect our consumers with their passions and tell our emotional story. Through our work with Lawrence, Martin and England Rugby we were able to bring the new Samsung Gear VR, Galaxy S7 and Galaxy S7 edge products to life in an engaging way to heighten fans’ experience at Twickenham.”

The Samsung Gear VR Experience will be open at the West Fan Village, Twickenham ahead of the England v Wales RBS 6 Nations fixture. For more information, please follow @SamsungSport on twitter. 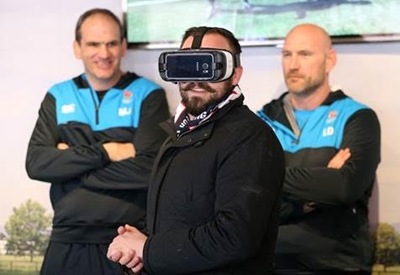