Euro Nations Cup 1A Round 3 round up 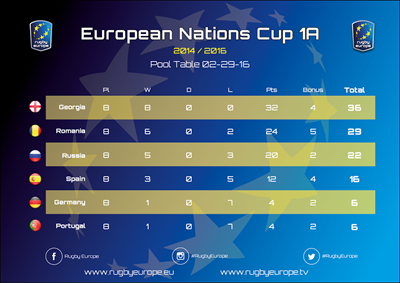 Germany kept their hopes of staying in ENC 1A alive with a thrilling win over relegation rivals Portugal, a game that was shown live on Rugby Europe TV. A hat trick for Germany flanker Jacobus Otto helped his side to a vital 50-27 bonus point win that has given their chances of survival a big boost. A last minute try from Portugal full back Nuno Guedes secured a bonus point for his side, ensuring that both teams enter Round 4 level on six points.

Georgia were dominant from the start of their 38-7 victory over Spain, scoring two penalty tries in the first half hour. Their bonus point victory sees them top the 2016 standings, just one point ahead of Romania. Spain have been unable to back up an impressive 2015 campaign, falling to three straight losses this year.

In the day’s final match, Romania proved their title credentials with a big 30-0 win over high flying Russia, who were never able to gain a foothold in the game. The bonus point win puts a big dent in Russia’s title challenge, while Romania will be feeling confident having got through this difficult tie.

Following a week long break, the European Nations Cup will return on Saturday 13 March with three exciting games, all broadcast live and free of charge on Rugbyeurope.tv

The relegation battle heats up in Round 4 with Spain hosting Portugal in a critical match at the bottom of the ENC 1A table. Level on points with Germany after eight matches, Portugal are desperate for victory over their local rivals to boost their chances of staying in the division.

Portugal’s relegation rivals Germany travel to title challengers Romania in a match with implications at both ends of the table. Germany know that they have to come away from the game with something to put the pressure on bottom of the table Portugal, while high flying Romania will be desperate to keep pace with title rivals Georgia.

The highlight of the day’s rugby will be Russia’s visit to Tbilisi to take on defending champions Georgia. Russia will be hurting from last week’s loss in Romania, and know that a win against Georgia could put them back in the title picture. Georgia have looked dominant so far in the European Nations Cup 2016, but their toughest challenges are yet to come with matches against Russia and Romania to come.

The European Nations Cup (ENC) 1A 2016, takes place at the same time as the RBS 6 Nations Tournament. Organised across a two-year period, the ENC 1A will crown the European Champion, after the second leg running from 6th February until 19 March 2016.