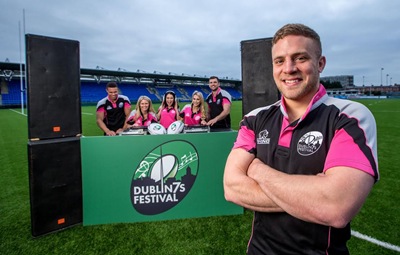 Global talent will descend on Dublin for Rugby 7s Festival

On May 28th Donnybrook Stadium will host the inaugural Dublin 7s Festival, where 12 elite international rugby teams will entertain up to 5,000 spectators with a competitive exhibition of 7s rugby, where sublime individual skills combine with teamwork for spectacular results. Some of the biggest names in world rugby will descend on the capital including professional teams from England, Ireland, Italy, Norway, Japan, Germany and France.

An elite women’s match featuring players from around the globe will whet rugby fans’ appetites ahead of the 2017 Women’s Rugby World Cup hosted by Dublin and Belfast and for those looking to take to the field themselves a 48 team graded tag rugby tournament will run alongside the elite competitions.

Spectators of all ages will be entertained throughout the day by live music, festival favourite DJ sets, a family fun zone, artisan food stalls and for the adults a craft beer zone featuring Ireland’s top brewers.

“This is set to be the biggest and highest profile 7s tournament ever to be held in Ireland and an opportunity to play witness to the best 7s rugby players in the world battle it out in Donnybrook Stadium.

It’s more than just rugby, we’ve gathered the best in music, food, family entertainment and craft beer. Whether you’re a rugby fanatic or just learning about the game we have you covered.”

Tickets start at €15 for general admission with VIP and corporate hospitality packages also available from www.dublin7sfestival.ie.