Six Nations Team of Round 2 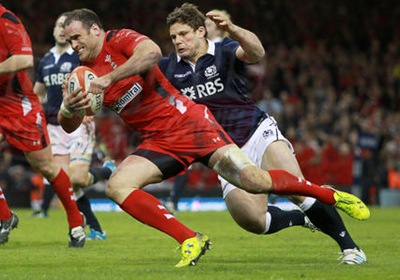 Well once again referees take centre stage for making decisions or rather non decisions in all 3 games this weekend. Make no mistake each game's outcome was influenced by weakness from the man in the middle , first off in Paris how Messrs. Guirardo and Maestri stayed on the field baffling and the offside/non offside for Wales' first score was the difference in Cardiff. At 11-9 to England , Glen Jackson bottled a binning for Haskell's idiotic tackle in the air , how might that game have been different had the correct call been made. Players and coaches work their backsides off throughout the weeks and days leading  up to these matches and poor officiating is deciding the results far too often . Anyway mini rant over lets get onto this week's selection.

15. Maxime Medard (FRA) - Apart from the scoring the crucial try on Saturday it was great to see Medard reappear from the doldrums, Ireland tested him regularly and was never found wanting under the high ball . A danger on the counter attack he made good yards everytime.

14.George North (WAL) - Another player to return to form , looked hungry and went looking for work all game which is a big bonus from a wing . Sliced through some questionable tackling but a good finish nonetheless

13. Jonathan Jospeh (ENG) - Took his chances well and a hat trick at international rugby is not to be sniffed at. Attacked at will late on when Italy flagged but his kick chase and workrate were top class , a player who has had a tough start to his club season but with Daly not picked and Slade injured he is taking his moment to shine.

12. Jamie Roberts (WAL) - Pretty he isn't but effective he most certainly is , the acolyte of ''Warrenball'' had another powerful outing. Duncan Taylor is very unlucky to miss out , their battle was a highlight of the weekend.

11. Tommy Seymour (SCO) - A player to watch for Lions selection next season . Like North went looking for work and does a lot of unselfish work in the kick chase game . An accomplished footballer is a very balanced runner and will improve further.

10. Dan Biggar (WAL) - Controlled the game well . A position where no one really excelled this week for me  Biggar gets the nod over Sexton and Ford.

9. Greig Laidlaw (SCO) - Again like Biggar , vital to the Scottish gameplan at the moment , keeps his backline moving and a reliable goal kicker , must interest opposition back rowers move to improve but does his basic scrum half skills very well.

8. Taulupe Falatau (WAL) - For me the most important player in the Welsh XV , Wales don't have much to challenge him for his position in the team but still never seems to have a bad game . Does everthing well and never takes a backward step.

7. John Hardie (SCO) - The kilted Kiwi is a shrewd operator and his work at the breakdown kept Scotland in the game on Saturday evening. A willing carrier too but his best work is done in the trenches both freeing up his sides ball and slowing down the opposition. Got the better of his battle with Justin Tipuric was watched much more closely at games end by Warburton.

6. Damien Chouly (FRA) - Not the greatest backrower les Bleus have ever produced but his colleagues could take take a leaf or two from his book regarding effort.

5. George Kruis (ENG) - Turning into a proper lock with every game , carrying has improved beyond recognition and his tackling packs a punch too . Hartley's lack of accuracy at lineout time didn't do him any favours.

4. George Biagi (ITA) - A great game from the Scottish born Zebre player. A nuisance at the breakdown , Biagi threw himself whole heartedly into the game and certainly produced an effort unexpected form his outings in the Pro 12.

3. Rabah Slimani (FRA) - Impact sub of the highest order. His introduction turned proceedings in the dullest game of the weekend , with France looking to turn the screw at scrum time.

2. Guilhem Guirardo (FRA) - Head high shoulder charge aside he is an excellent hooker , solid at lineout and scrum did not get to see too much of his offloading skills in terrible conditions.

1. Mako Vunipola (ENG) - Not as conspicuous ball in hand but a good shift from the Saracen , one thinks Eddie Jones will keep changing his loose-head in a horses for courses way but for me a far superior player to Marler.