Six Nations Team of Round 1 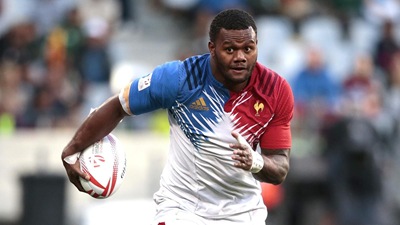 So another 6 Nations is upon and the three opening fixtures certainly proved enthralling if not the most entertaining rugby we have ever seen . France sneak a close one , England looked powerful at times yet limited and Ireland Wales served up probably the best contest of the weekend with serious physicality on show . And referees as per usual played their ever increasing part in the outcomes of the games , here is my selection from the opening set of games.

15. Stuart Hogg (SCO) - A talented player who seems close to being back to his top form. Solid under the high ball and a great counter attacker , needs more from the guys in front of him to shine fully .

14. Jack Nowell (ENG) - Not the prettiest or flashiest of wingers on the scene but an immense appetite for work and turning into a good finisher too, Chris Ashton's stray fingers should allow him a clear run in the starting XV

13. Michele Campagnaro (ITA) - Italy have a gem of a centre in Campagnaro they just need to get better at utilising his skill set , dangerous runner and more than able defender almost scored after a searing break and like his a few more of his teammates  very unlucky to end up on a losing side .

12. Jamie Roberts (WAL) - A ridiculous tackle count and one of the best individual defensive efforts I have seen . Limited in attack but always takes a few guys to take him down , subtle he is not but always rather have him in your team than having to face him.

11. Virimi Vakatawa (FRA) - Another naturalised Fijian playing for France , having not played XV's in a few year a risky selection by Noves but so far so good , will be tested by better kicking fly halves in future games but a big danger with the ball and someone France can build around.

10. Jonathan Sextion (IRE) - Written off again by journalists who pose as medical experts , Sexton produced a fine all round game , kicked his goals , ran hard and spotted a few gaps . Hopefully a sign of more to come

9. Connor Murray (IRE) - Less kicking more movement of the ball was needed post RWC and we saw how dangerous Murray can be wen not on a leash ,best game for ages in a position where his rivals did not set the world alight.

8. Sergio Parisse (ITA) - A strong showing from most of the number 8s over the weekend but a fit again Parisse showed again why he is considered one of if not the best no.8 over the past few years. A talisman for Italy all over the park , lineout , restarts carrying defending , maybe not the best option to attempt a game wining drop goal but wouldn't have been surprised if he had slotted it. Toby Faletau had a very strong game too

7. CJ Stander (IRE) - Strong debut from the project player , despite a couple of costly fumbles should be retained when other backrowers come back to fitness, dynamic ball in hand and a great engine. Needs to improve breakdown work in future

6. Billy Vunipola (ENG) - Ok , I know another no.8 out of position but he was the pick of Englands pack giving them go forward usually from a standing start , still feel someone should've made him a prop a few years ago. Needs to improve offloading game to progress further but his fitness is now much much better .

5. Devin Toner (IRE) -  I am personally not his biggest fan , but for me he has his best game in a green shirt last Sunday , made a nuisance of himself all over the park and his lineout work is badly needed . More of the same please from now on.

4. George Kruis (ENG) - Should have played a much bigger role in the RWC , the selection of powderpuff Geoff Parling still baffles over this athlete. A big step forward in all around contribution both in general play and at lineout time. Should be a mainstay for Eddie Jones' pack .

3. Dan Cole (ENG) - Still gives away too many penalties but a strong effort from the Leicester man , still feel Kieran Brookes will be Englands tighthead long term , but Coles locked his side of the scrum well and had one vital turnover at an important stage of the game.

2. Guilhem Guirado (FRA) - Shades from Dylan Hartley for his around the park work , a talented ball player and good in the tight exchanges too.

1. Mako Vunipola (ENG) - Massive impact sub in so far as he really influenced the outcome of the game , like his brother an excellent ball carrier and improving his tight play week on week , deserves a start over the massively overrated Marler. Both looseheads in the Ireland Wales game had decent outings too .