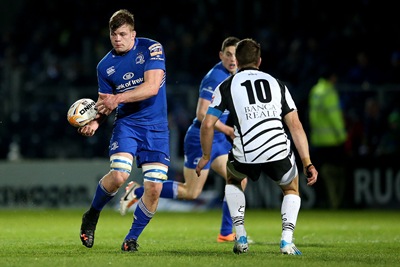 I’m not sure if Leinster have ever had more riding on a trip to Zebre (or even their predecessors Aironi for that matter) than they do this weekend.

There might be some daylight between the top four and the rest of the Pro12 (8 points to be precise), but these days every position counts….4th means playoffs, 3rd means top two pots in next Euro draw, 2nd means home semi while 1st means, well you were the best over 22 rounds, which “ain’t nothin”!

Hopefully Leinster will have enough to not only win on Sunday but also secure a try bonus point early, much as they did in the recent meeting at the RDS, so that the bench can be used for some “player management”.

But more on that later in the week...today I’d like to harp on a match we had against Zebre back in 2014, particularly in relation to how the try bonus point is awarded.

Just in case you don’t know, at the moment in most senior rugby competitions you get four points for a win, two for a draw and none for a loss.  You can also get a bonus point in two ways - one for scoring four tries or more and another for losing by 1 to 7 points.

The French Top14 has tinkered with this over the years.  Recently they changed the “losing bonus” so that you have to get within 5 points.  But for a while now they have been running with a different try bonus method which Super Rugby is also adopting in its new-look format when it kicks off this Friday.

Under this different system, scoring four tries isn’t enough.  You have to actually score three tries MORE than your opponent.  I’m going to use that Leinster v Zebre match from 2014 to make my case for why I reckon it’s a much better than the status quo.

Going back into that match in Donnybrook, our position in the Pro12 was similar to what it is today, in that we were in a very tight battle at the top of the table with two other Irish provinces and a Welsh region (only for Munster and Ospreys then, we now have Connacht and the Scarlets - Ulster involved both times).  So basically we also needed every point we could get our hands on.

In the 66th minute against Zebre, we got our third try courtesy of Luke Fitzgerald which put us up 20-0.  No doubt about where the four win points were headed, but we still had to get a fourth try in the final fourteen minutes otherwise the job couldn’t really be considered as “done”.

The only trouble is...the visitors decided they wanted to play for that final portion of the game, and after a penalty at midfield they put it in the corner and started with phases on our line.  I’ll let a portion of our match writeup set the scene a bit more…

But as our defence was being continuously pinned in our own 22, the clock ticking well past 70 and our tackle count was increasing, I wondered…would we have been better served by just letting them score at that point?

I know that sounds crazy, but we needed to get down the pitch and while 7 points to them wouldn’t affect us, a chance to restart and probably have an attacking lineout around halfway from the exchange would definitely have given us a higher percentage chance of getting try number 4.  A moot point given how the match turned out I know, but still it’s a bit nuts that there could ever be a case made for conceding a score.

In the end, Jordi Murphy did get the 4th try with the very last play of the game.  But the fact remains, ten minutes earlier we weren’t to know that would happen and under the current system there was a case to be made for actually letting Zebre score.  Under the French way of doing it (no sniggering down the back over those last few words!), with a 3-0 try count we would actually been in line to get the bonus point and conceding a try at that point would actually have seen it taken from us.

As much as I’d want Leinster to get the four tries early and bring out the cotton wool this Sunday, I’ve gradually come around to the view that it’s not necessarily a method that is doing for the sport what it intends.   Now I know my one example might not prove me right all on its own, but I think it makes sense in other ways as well.

What appeals to me most is that the try bonus doesn’t just have to be earned but also defended.  But also, except for very extreme circumstances, the alternative way means a team that loses can’t get more than one match point, which seems about right to me.

Anyway, I’d definitely be open to hearing the merits of leaving the try bonus as it is if anyone is up for a debate...it will make a nice change to all the other debates we’ve seen in Ireland in recent weeks! JLP
at February 24, 2016