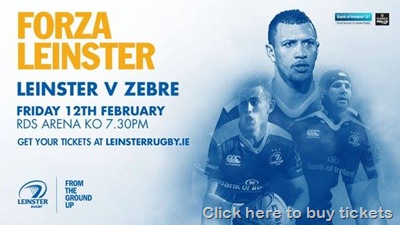 Well unfortunately, this Round 14 match at the RDS isn’t being televised but there’s still time to get your tickets and experience it all first hand! Alternatively check out the liveblog here on HarpinOnRugby (from 7:15pm)!

To business then, Leinster are hoping to bounce back after a 2 game losing streak having been thumped 51-10 by Wasps in the European Cup and then “Cullens Cubs” going down 23-13 away at Newport Gwent Dragons in the Pro 12.

Where those results a surprise? Yes definitely. Wasps was always going to be a hard game away but that margin was a shock. Yet it doesn’t mean we are THAT far off the top European teams by any stretch. Likewise I wouldn’t have seen Dragons doing us over, but a very young and experimental side just didn’t have it. I don’t believe there’ll be to many more of either those type of results for the remainder of the season and so let’s just accept it is part of the continuing development aspect at Leinster Rugby.

From a Forward’s perspective, it is fair to say that having the vast international experience of Cian Healy and Mike Ross returning from hamstring and knee injuries in the front row supporting Hooker James Tracy, is a huge boost for Leo and the squad! It must be said at this juncture that young Tracy really can throw a straight dart AND hook in the good old fashioned way!! The rest of the pack isn’t too shabby either. Dom Ryan, JVDF and Jordi Murphy in the backline and I’m looking forward to seeing Ross Molony & Hayden Triggs together in the 2nd Row. That’s a pretty strong pack where I’m looking from and would be against any Pro 12 team.

So what about the backs? Well I’m made up that youngster and indeed Irish 7s winger, Adam Byrne is playing. Having seen him score an excellent try and a number of gain line breaks at speed against Ulster at Kingspan in the pre-season friendly last August, I’m keen to see what he’ll do. Boy he’s fast! Interesting in that match he played 11 and he’s at 14 for this one.

A great 12/13 combo again with Ben T’eo & Garry Ringrose (I’m so genuinely sad that Ben is going next year, he’s become a really adapted Union player now. Be interesting to see if he progresses to the England squad at some point which is his aim!) Anyhow, with Zane Kirchner at his usual steady Full Back role (There’ll no doubt be an eye raised at that description by some?) and young Marsh in at Fly Half, the only disappointment for me is Isaac “Boss Kick” as Scrum Half. I’d prefer to see Luke McGrath starting (again owing to the youngster development role) but I suspect Leo is looking for a strong bit of experience to start the game off at least.

Zebre have some 12 players away on international duty with the “Azzurri” in their 6 Nations game against England and both Head Coach, Gianluca Guidi and Manager, Andrea De Rossi know that they will be up against it at the RDS where Leinster have won their last 9 homes games on the trot. The Italian outfit have been forced to bring in Fiamme Oro Rugby's Fly Half Maicol Azzolini as Kelly Haimona is one of those away with the national side and Rugby Viadana 1970s winger Abou Souare comes in for the injured Michele Visentin.

They have won their last 2 away games, won 4 Pro 12 games in total having scored 19 tries but only have 18 points and languish 2nd from bottom in the league. That said they are only a point behind Dragons and look what they did to us recently? The only narrowly lost to Gloucester in Europe and again went down at home to Munster 12-16 in the Pro 12 in their last match. Skipper Marco Bortolami will be making sure his team are fired up. There’ll be no throwing in of towels from them and guess who is sat on the bench….. Ex Connacht and 100 times capped All Black Fly Half Mils Muliaina!

You have to say though that Leinster should be taking a comfortable 5 points from this home encounter and then another 4 (at least) in the return fixture in 2 weeks time to consolidate our position within the playoff positions during this 6 Nations period.

The bookies are spread between 1/25 (Stan James) & 1/100 (BWIN) for Leinster whilst (BetFair) 17/2 through to (SkyBet) at 50/1 for Zebre on a straight respective win. Now if you have €100 to win €1 back on Leinster then you’ll probably be in a corporate box anyhow so won’t need it. Perhaps though there’ll be a few who’ll take a €10 punt on Zebre at 50/1? If you see some ecstatically happy Italians in Dublin on Friday night, you’ll know why! Seriously though, my only punt is on Leinster making the Pro 12 Final on 28 May in Edinburgh!!

What does that bookies spread transpose to with points, well they seem to agree with me (lol) and a comfortable 16 - 20 points difference (plus my belief in getting 6 tries and a therefore a BP win!!)

Let’s get down, up or across from wherever you come from to the RDS for the 1930Hrs kick off and support the Boys in Blue and I’ll see you with the match write up on Monday next!! #COYBIB

No TV coverage - Liveblog on HarpinOnRugby.net