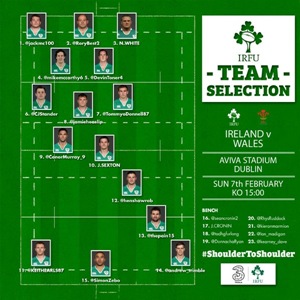 Remember the quiz show “The Weakest Link”?  Apart from Ann Robinson’s demeanour (as in the worse your answers got, “de meaner” her slagging off got) one of the things I found interesting about that show was the actual format, as in how the contestants made their money.  It wasn’t just about how many you got right - you had to get them right in a row.  And if you didn’t “bank” your total, the next wrong question meant you lost it all.

It seems that Joe Schmidt’s tenure as Ireland coach is being judged in a similar fashion - Six Nations title 2014, another in 2015, wins over all rugby championship nations bar one (the biggest one and we came damn close) and finishing top of the RWC pool.  Unfortunately he doesn’t appear to have banked any goodwill in some quarters on foot of that (admittedly shocking and disappointing in how it happened) defeat to the Pumas in Cardiff.

One of the things levelled at Irish rugby about its “demise” has been the failure of our provinces to advance in Europe.  Well, the same applies to the Welsh regions but that will hardly bring them down at this stage as they are well used to it.

But in other areas, our Celtic cousins seem to have a definite edge.  Much more settled squad, much more confident coming out of the World Cup given their tougher pool and much more impressive quarterfinal showing.  Not to mention the swagger of Warren Gatland who would have named his matchday 23 before Christmas if he could have.

And as I was at pains to point out in my first Six Nations post during the week, I don’t actually agree 100% with Joe Schmidt on everything he does.   On top of that there are elements of this selection I feel go against recent form, like Ian Madigan on the bench ahead of Paddy Jackson (though I’d say the ability to cover 12 could be what got him the nod).

So I guess all of the above means we’re definitely doomed, right?  Er, no.

Look...all these people crying out for a more expansive style of rugby not only from Ireland but from all of the six nations seem to be forgetting what makes this competition unique.

Though it officially has a “round robin” format, the reality is that it consists of fifteen bouts of cup final rugby.  The real prize up for grabs is a Grand Slam.  Triple Crown is in there a bit as well, I know, but in the pro era I think it’s value has all but disappeared as time wore on.

Every year, at the start of each tournament, all six nations have a clean slate and the chance to win all five matches.  They all play with that in mind until the duck egg in the loss column is gone and then the Championship and/or highest possible finish comes into play but that is always considered a consolation.

What I’m trying to say is that we can argue about tactics until we’re blue in the face, but in Six Nations arenas they only get you so far.  What you must also have in abundance are the abstract concepts like leadership, aggression, experience...and in later rounds that other old chestnut called “momentum” comes into play.

Joe Schmidt isn’t 2 for 2 in these competitions by pure fluke.  In neither campaign were we perfect, but by the same token we certainly did enough to deserve being on top, and nobody can say we weren’t prepared from the off.  So for this reason I say we at least give him a chance to show us what he has in store for the 2016 version before we judge.

What I’m getting from the interviews and this team selection is that he wants to show us what he could have gotten done in that RWC quarterfinal without such a battered squad.  Unfortunately, the week leading up to this one hasn’t been kind with the forced withdrawals of Rob Kearney and Sean O’Brien, but there’s not much that can be done about that now.

It is great to see Andrew Trimble back in the lineup...I doubt Joe ever wanted to leave him out and had he recovered just a week earlier he probably would have gone to the World Cup.  And while Paul O’Connell can never be “replaced”, the 5 jersey must be filled and Mike McCarthy has most certainly been showing for Leinster he wants it, and what’s more he could be just the character we need against this opposition.  I am also very happy to see CJ Stander get his debut; he is well used to the man-of-the-match gong at Munster and I reckon even Peter O’Mahony will be happy if he gets one here!

The Welsh will come to the Aviva Stadium with no fear and with every confidence that their Warrenball style will be enough to beat us.  And in the centre they have two absolute powerhouses of the game to get that job done.  But Joe seems absolutely convinced that his Henshaw/Payne combo is good enough to withstand anyone.  And I for one see no reason not to believe him.

I disagree with the bookies that the Irish are favourites for this match.  For me, if anything the spread should be at least 2 points in Wales’ favour if not a point or two more.

Having said that, my prediction is for an Ireland victory by three.  It will take a momentous amount of tackles, it will take nigh-on perfect set-pieces (and remember these days that very much includes restarts & exits), it will take keeping the visitors to a score below the mid-teens, it will take finding that balance between aggression and discipline.

But the reason we put on that green jersey and head to the Aviva Stadium is (or at least should be in my book) that we believe that our boys can get the job done.  So let’s fill that place with noise and let them know just that.

Of course best of luck also to the Women and the “Wolfpuppies” this weekend.  It’s very difficult to find the time to go watch all three...I don’t understand why the weekends before and after the men’s tournament plus the two off weeks couldn’t be used to spread out those matches a bit more so there could be bigger turnouts.   JLP

PS – speaking of weakest links, I reckon both teams have theirs at fullback.