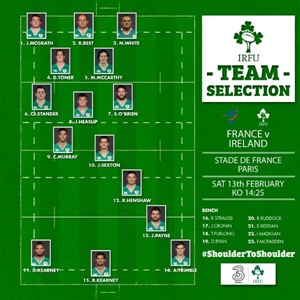 Warren Gatland will always be Warren Gatland.  By that I mean he’ll play his style no matter what the opposition - that’s how he does things and he’s certainly had enough success to deserve credit for it.

But pretty much any other coach on the planet would look at Ireland and go…”So the Pumas found a way around their defence, eh?  (*strokes chin*) Maybe we can have some of that….”

It has been well documented that our “narrow” style of defending was shown up in those fateful opening minutes at the Millennium Stadium.  The idea is to get it out wide fast and have the numbers there to exploit the extra space.  Sounds simple when you use those words, but for this to work you REALLY do have to be quick because just a fraction of a second’s delay and you’re swallowed up.

The Welsh instead put all their stock into their centres drilling holes down the middle of a defensive line and you couldn’t blame them for expecting Messrs Roberts & Davies to get that job done last Sunday.  But they were completely denied by  “Henshayne”, Joe’s manufactured dynamic duo.

Well, now our 12/13 combo face a different test altogether.  I can’t help feeling the instructions of Guy Noves to his centres Danty & Mermoz will be to make sure that pill gets wide as soon as is humanly possible, and out there they have a pair of very strong finishers in Teddy Tomas and Virimi Vakatawa.

I know I always harp on defence but I have to because it is such a key element to how we approach the game and keeping our opposition’s score down around the mid-teens is crucial if we are to get a result.

And while some have “poo-pooed” the notion of a “six-day-turnaround” being a hindrance (ie the players are pros they should be well able for it blah blah), I’d like to see them tackle those Welsh giants for 80 full minutes and recover in time to face a trip to Paris on Valentine’s weekend, which I assure you will be anything but a love-in.

Unfortunately there have been some enforced tweaks to the squad.  I understand there are a few noses out of joint in the twitterverse because there are Munster players (Zebo, Earls & O’Donnell) being replaced by Leinster players (R Kearney, D Kearney & O’Brien with McFadden added to the bench).  All I can say to that is that if Joe is so biased why did he have the Munster men there in the first place?  And when he did, there were similar small sections of Leinster fans complaining – maybe I should ignore such provincial bias altogether, but I’d much rather call it out for what it is.

The fact remains that like Mr Gatland, Joe knows the way he wants to play and he puts together his matchday 23 based on the available players he reckons can best get that job done.  So we must look at his pecking order in the various combinations seeing what he tries to do in those areas, not what provinces they hail from.

Of course Tommy O’Donnell in particular is extremely unfortunate to miss out as he did extremely well on Sunday.  But Sean O’Brien is someone you simply can’t leave out once he’s match fit and when you put him in alongside the on-form Stander and Heaslip, with halfbacks Murray and Sexton playing off them, you have a 6-10 set that any of the six nations would love to have.

And while we should of course expect high standards from every position at this level, it’s around the breakdown where we’ll need every bit of aggression and technique those particular players bring to the table.  If I’m right and the French are hard-wired to make the most out of any little opportunity they can sniff, that might well force them into hesitation and this is something we in turn can exploit.

Let me put it this way...I’m quietly confident about our chances, and how often do we say that about playing at the Stade de France?  Sure, we won there last time, and sure we did the “sister-kissing” thing before, so it’s not like we haven’t gotten results over there in recent years.

But going into to those matches, there was nothing taken for granted.   Nor is there here, mind you, but if we put up an opening half hour similar to that we did against Wales I reckon we’ll be better prepared for bringing an early lead home.

The bookies don’t want to call it.  In truth, neither do I.   Quietly confident I may be, but the possibility of contentious calls, injuries, our scrum having more problems etc will always keep it in check.  So when it comes to my prediction, I’m going with Ireland by 1-3, but all the while I’m heavily tempted to part with some euros on the 16/1 offered for another draw.

All in all we have to feel better than we did going into last Sunday.  Let’s get behind them and get that #ShoulderToShoulder hashtag trending between now and kickoff.  It promises to be another pulsating 80 minutes of rugby.

Best of luck also of course to the Women (great to see them live on d’telly) and the Under 20s.  Last week I moaned about having all three the same weekend...imagine how I feel about a whole round of Pro12 matches in the mix as well!  JLP