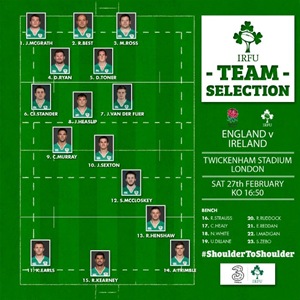 A whole lotta rugby to choose from this weekend!  Clearly the Six Nations gets our No 1 vote here at Harpin Manor, with the Pro12 coming in second and the Super Rugby kickoff picking up some easy transfers.  Premiership & Top 14 will probably struggle to make the quota.

OK - that’s enough of the election references, I promise!

The reaction of some fans to Ireland’s haul of just one point from a possible four in our first two Six Nations matches has been that what “must” be done is for a whole new group of younger personnel brought in and for the playbook to be ripped up.

Well, they got their wish on the first count, with Stuart McCloskey and Josh Van der Flier brought in to start and Ultan Dillane on the bench.  But I wonder would they be in the picture this weekend at all if we had Messrs Payne, O’Brien and McCarthy to call on?

And when it comes to the second point, ie changing the way we play, I’m also wondering if this is the match where we want to roll out a whole new style of playing?

This is England at Twickenham.  It might be something of a “new look” squad in terms of personnel and captaincy and number on Chris Robshaw’s back, but I wonder just how much different they’re going to play compared to previous seasons.

I can’t look at these two set-ups without thinking it’s going to be yet another battle of tight margins and if that’s the case, I really can’t see anyone in either starting lineup who looks like they’re planning to take a whole lot of risks, so those looking for an offload-fest could well be disappointed.

Now that’s not to say we can’t be excited about the possibility of Stuart McCloskey bringing his bulk towards Ford & Farrell.  But with Joe switching Henshaw over to 13 it leads me to assume he has his centre pairing set to prioritize D as would his more preferred selection.

Then there’s Josh.  If he brings half the enthusiasm and talent he has to his senior appearances for Leinster this season then the Twickenham crowd are bound to know his name come full time.  And he goes head to head with James Haskell who I reckon is over rated in the English press though will probably go on to prove me way wrong on Saturday!

It’s not as though there isn’t anybody in the two benches to liven the match up towards the end...Danny Care on the English side and for us, Simon Zebo could well be the ideal person for the 23 jersey in a Joe Schmidt squad.  Probably not what he’d like to hear, but if we find ourselves needing a try in the closing stages I reckon he’s the best guy we have for that role.

We have raised some question marks over the refs in the matches so far, and it doesn’t get much better with Romaine Poite holding the whistle this weekend.  Not much can be done about that, but it is critical we stay on top of our set pieces.  Mike Ross’ return to the lineup is key when it comes to locking down the scrum...hopefully he’s up for a lengthy shift.

It’s a tough match to call.  I don’t share the pessimism of the group of Irish fans I now call the #SchmidtStirrers but having said that this English team is bound to be tough to beat.  The bookies have them winning by an 8-point margin but I think it will be a lot closer than that.

My official prediction is that we’ll nick it by a point.  But to do that we probably should score a try in the opening half an hour that helps build a lead of 8 or more points so we can take control and bring it home.

As far as I’m concerned, it’s very important that we put in a good 80 minutes for this match, especially with the fixture list we have ahead.  Nobody will be impressed by good displays against Italy or Scotland, then it’s three in South Africa, two against New Zealand and one against Australia.  You think folks are moaning now?  Imagine how they’ll be if we can’t get much out of that series of matches?

We may be all but out of contention for this Six Nations but if we’re to feel confident going into the next one I reckon Saturday is when we need to start showing it.  And like I say, I’m backing us to come out on top in what should be a bruiser.  Bring it on.  JLP