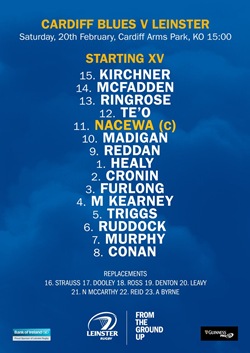 A 52-0 win in against Zebre was great and all, but it really told us very little about where we are.  Not that long before the tonking, we had pretty much the same done to us by Wasps, which I’m sure you won’t thank me for reminding you.

Saturday’s match in the Welsh capital is bound to give us a much better idea of how we’re set for the road ahead.  The Blues may be destined to finish in the lower half of the Pro12 table yet again (and just last week they were the first team to lose to Treviso this season), but still they’re never easy to beat at home and with Peter Fitzgibbon slated (in more ways than one) as ref it’s bound to be a much greater challenge.

This could well be one of the strongest lineups Leinster have been able to field during a Six Nations.  When the least experienced player in your starting XV is someone many are saying should be called up for a test debut asap, you know you’re on to a good thing!

In our second row the good news of Mick Kearney finally able to start for us is very much offset by Mike McCarthy’s season being over.  But once Kearney and Triggs can stay fit along with Toner through to the end of the season we should be ok.  Terrible news for Mike of course...he was having a banner season with some great shifts.

Taking the out half role is Ian Madigan.  Took a lot of stick for putting the restart out on the full in Paris and it has to be said the choice to put the ball in that area was a bad one.  A full game running a back line is definitely just the thing he needs and he certainly has plenty of options around him.

Another returning from injury in the Leinster pack is Jack Conan.  His career has been something of a rollercoaster over the last 18 months or so and he could definitely do with a run of games under his belt before the season is out.  He lines out alongside Rhys Ruddock and Jordi Murphy, both also keen to impress the national coaching set up.

Tadhg Furlong starting with Ross on the bench suggests the latter is ready for a callup for Twickenham, and if so, it’s not before time the way things have gone.  Cian Healy should also be in contention next week though despite his new deal I reckon it might be unfair to throw him into the green number 1 jumper ahead of Jack McGrath.

On the Cardiff side of things, it’s interesting that Matthew Anscombe is at 10 with Rhys Patchell at 15 considering the former was lining out at fullback for Wales while the latter has generally been the outhalf of choice for the Blues (though he was at 15 in Treviso last week).  In fact overall it’s a curious 23 with a lot of experience on the bench in the form of Rees, Navidi and James.

The bookies have Leinster as four-point favourites for this one but I have a feeling we’ll need a bigger lead than that going into the final quarter to bring home the match points.  I think we’ll have enough to get the job done...might take a bit of luck along the way but once the team can gel quickly on the plastic surface (and fielding the same centre pairing for more than one match definitely helps) we can come away with a margin of 6-8 pts.  A four-try bonus could be beyond us though.

Basically we need all the points we can get in what is becoming a competitive race for the top positions in the league.  Next week we travel to Zebre and after that it’s a tough enough schedule ahead with Ospreys, Glasgow, and all three other provinces on the horizon.  The time to start finding end of season form is now.  JLP