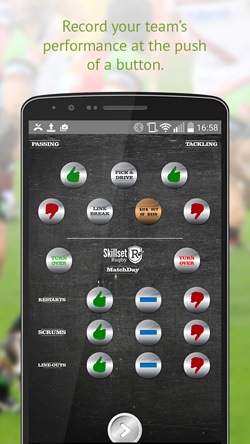 Note : this week’s format is slightly different than usual please read carefully
For this week’s “unriggable raffle” competition we have FIVE copies of the new Matchday Rugby Stats app (for Android devices) to give away.  What say we let them tell you a little more about it…

Did you know that an under 14 rugby match sees on average 8 line-outs and 13 scrums. The same match will see on average 115 passes and 162 tackles. Knowing this, how much time will you spend training scums? Or say your team makes 11 line-breaks per game but only scores 2 tries, how will you rectify that during training?

If after 5 league games you realize that your team always makes double the tackles in the second half than they do in the first - how will you change your fitness regime - specifically around your player’s ability to contest and retain possession?

Up until now the above statistics were expensive to gather with complicating computer data systems linked to GPS. This meant that only professional or semi-professional clubs and teams could really afford to record proper match data.

All this has changed with the release of MatchDay Rugby Stats, a mobile application designed with the school and amateur club coach in mind. For a mere Eur15 you can now use your smartphone to record all these and other vital match statistics right next to the pitch during  a match.

The app is a push-button solution that works in real-time to record rugby teams or individual players before sending match information to coaches, players and parents straight after half time or a gamesend. This allows coaches to plan more focussed training sessions while giving players and parents clearer game targets to reach and improve upon.

“This app is going to make our jobs so much easier as coaches because we can now coach with real information about our teams.”

“The matchday app has totally changed how I coach, and I have not even started using it to measure my opponents!”

As always, to qualify for the competition you will have to stay tuned to the HarpinOnRugby Facebook page throughout the coming week and follow the instructions when the posts are published.  Below you will see a grid showing the days, times and number of qualifiers for each post.
Click here for a more detailed explanation of how the “unriggable raffle” works.
This week there are FIVE chances to win and for that we’ll need five rugby matches…
Friday, Feb 12 : Leinster v Zebre, 7:30pm
Saturday, Feb 13 : France v Ireland, 2:25pm
Saturday, Feb 13 : Wales v Scotland, 4:50pm
Saturday, Feb 13 : France v Ireland (Women), 8pm
Sunday, Feb 14 : Italy v England, 2pm
As with all of our unriggable raffles there will still be just the one grid with 100 squares.  Should the same square come up more than once or should the same contestant win more than one prize we have alternative rules in place to ensure there are five different winners.
The following extra rules are unfortunate but necessary.
at February 07, 2016