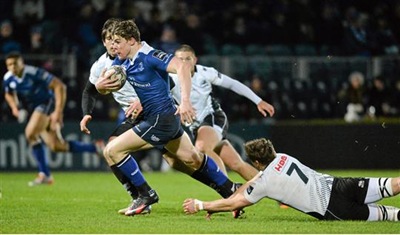 Well in my Leinster v Zebre Preview  on Friday last, I stated that Leinster were hoping to bounce back after poor defeats in both Europe and the Pro 12 against a (usually) spirited Italian outfit who had produced some credible results this season and who had suffered only narrow recent defeats in both Europe (Gloucester) and in the Pro 12 (Munster) so one could be expecting a little more than as it transpired. The Leinster match advertisement was titled “Forza Leinster” (Force Leinster), whereas from an Italian perspective, it was “Farsa Zebre” (Farce Zebre). More of that later!

Leinster with returning front props Healy & Ross made a strong start with a great to see trademark Cian Healy run into the Zebre 22. Following a Ringrose foray (again more on the youngsters running later), Hayden Triggs goes over in the 9th minute for his first Leinster try which was converted by Isa.

Unfortunately a minute later, Isaac “Boss Kick” limped off injured and was replaced by the excellence of youngster, Luke McGrath.

Whilst Zebre tried to pressurise the Leinster defence, it was mostly half hearted and their only opportunity in the first half came from Leinster not rolling away and the subsequent penalty was placed wide.

On 20 minutes, some excellent handling  by Leinster right across the width of the park saw Isa touch down then convert to take us into a 14 - 0 lead.

Now the Italians were reasonable in defence but Luke McGrath's try on 36mins shows both the poor play of the Zebre defence but also the amazing situational awareness of the youngster. Following a 5m lineout the resulting maul saw McGrath literally go into the maul from the back, dig out the ball and zoom…. he was away and over for Leinster's 3rd try. He didn’t even look up! He saw the ball in the maul, got it and was gone. Great quickness, situational awareness and exploiting a weak defence. An example to all on how to QUICKLY exploit an opportunity.

Leinster added a 4th and the BP try just before the brake again from another youngster, Irish 7s winger Adam Byrne. Now in my preview I said I was looking forward to seeing him again. Unfortunately he had more of a cameo role but when he did step off his mark it was very impressive.

The second half saw Zebre come out with a little more fortitude, intensity and belief………….. Well I say that but to be honest Leinster DID take their foot off the peddle a little so not wishing to be discouraging to the visitors, it was hard to tell. Anyhow, Leo emptied (most from what I could tell) of the bench and the game ground itself out till the 60 min mark when some excellent work by the replacement Cian Kelleher on for Isa Nacewa which then saw Jordi Murphy get across for the 5th of the evening.

Having now built up a revised Leinster head of steam, an excellent run by replacement Hooker Sean Cronin going over for try number 6 then again an even better run by him setting up MOTM Garry Ringrose for No 7.  The try of the evening though was undoubtedly number 8. Kelleher caught a high ball inside Leinsters own half then proceeded to decimate the Zebre defence, straight through the middle and over for try number 8.

Now here’s a couple of points. Firstly, Zebre clearly lacked strength in depth. I’d go as far as to say any National School Under 11s would have provided a sterner test for Leinster! Having some 12 players away with The Azzurri in the 6 Nations game against England (which clearly made no difference!!), they lacked any real “Forza” in which to test a strong Leinster side. My impression was that they had absolutely NO spirit overall. Apart from the 3rd quarter (and I’ve already said perhaps it was Leinsters own drop in intensity through this period that made it look so??), they were apathetic! Kicking high balls that no-one really wanted to chase, half hearted attempts at defence and a singularly attempt at attack with the aforementioned missed penalty and again that was from a Leinster infringement? I’m convinced it’s good for the game to have the Italians in the Pro 12 just as I am having a Tier 2 5 or 6 Nations, but I wonder if their Union needs to be pressurising the government to put more funding and support into their game? Am I being unfair the the Italian outfit? Perhaps, but then that’s my genuine view I’m afraid! Not good for them, their small band of travelling fans nor indeed for Rugby in general. Even more disappointing since some of their performances results have been credible this season.

Secondly and perhaps I make it sound like Leinster couldn’t do anything wrong. Not at all. I loved the way they went for the line and not take 3 points which so often seems the case! Again from a tactical perspective perhaps against “decent” opposition you need to take the points and build the lead………... Nah, I’m trying to convince myself here methinks!! I want to see my team going for tries! I want to see my team in an attacking mode for 80 minutes! I want to see width being played and EVERYONE not just the youngsters running at the opposition! Is that impractical? I don’t give a rip I’m afraid. As a retired Tight Head, the pack works for 80 minutes and then some, so best the Backs do the same. Perhaps the Irish team could learn from this approach, running, width, attacking, going for the line, applying pressure, and yes that old fashioned aspect that wins games……………...scoring tries!! But then perhaps now we have lost any hope of this seasons 6 Nations, Saint Joe will bring in some youngsters that starred in this game PLUS others akin from our other Provinces.

All in all a decent night's work, 8 tries, 52 points and a BP 5 points that leaves us 3rd in the table and only 1 point of the top 2 with a game in hand. Let’s hope the style of play we saw from Leinster in this game not only continues in our remaining fixtures but spreads to the National side. There’s MUCH to be said for it!!