Ireland 2016 - reliving the past vs shaping the future 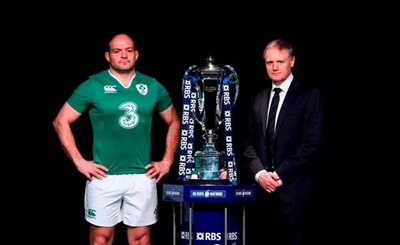 Going by this post’s title, given all the hoopla we have seen lately here in Ireland you’d be forgiven for thinking that this was a post about the anniversary of the Easter Rising.  Relax - we cross the street to avoid political matters here at Harpin Manor, at least when it comes to content we’re putting on the site.

This is of course about the Irish rugby team and our chances for success in 2016.  We have  matches in that time which will give us a very good indicator as to how we have been able to recover from that World Cup quarterfinal...but we can talk about the tests against RSA, NZ & AUS later...first, let’s have a look at the Six Nations ;-)

I can’t help but be inclined to rail against the doom and gloom about the place regarding our fortunes these days.  Sure, it’s hard to ignore the Argentina result, the provincial European woes and the continued head-turning of Irish players by the Premiership and the Top 14.  But if we let that dominate our thoughts and in turn jettison the back-to-back Six Nations titles, then it probably says more about us than it does the national team.

Overall, I think Joe Schmidt has done a bang-up job since he took up the reins in 2013, and I really don’t think that has been stated enough since the RWC exit.  Top-tier test rugby is a results-based game and while the style of play hasn’t exactly been what you could call “champagne”, it has to be said that it has been a process he has managed to get the entire squad to both buy into and implement.

I honestly believe that he and the entire Irish set-up deserved a lot of leeway in our analysis of what happened against the Pumas.  The shock on our part as fans was understandable, but for me, now that it has died down, we must be sure the match isn’t remembered without paying mind to the way Joe’s ideal starting lineup was decimated by injury.

Over the past couple of days I have heard two different media sources suggest Johnny Sexton started that match...he didn’t, and neither did Paul O’Connell, Sean O’Brien, Jared Payne, Peter O’Mahony, Tommy Bowe...all key elements to the Schmidt Plan and primary sources in crucial areas of offence, leadership, aggression and defence.

Now before I go on, I want to bring up a topic on which I very much disagree with Joe Schmidt.  I reckon it’s important for me to do this now because if I don’t it will make me look like I’m an unquestioning worshipper of the guy!  Though I suppose running a Leinster & Ireland rugby website as I do, that would be understandable given all the success he has brought to those teams over the years…

Still, where I’m not so willing to #TrustJoe has to do with the so-called “exodus” of players.  I dealt with this recently in another post, but no harm going over it again.

For me, while it is definitely preferable for Irish test players to be based at the provinces, I don’t consider it to be the ideal.  That would instead be the selection of the best 23 Irish-qualified players possible on any given test matchday, no matter where they ply their trade.

This stance of course puts me up against not only Joe but also David Nucifora and their employers the IRFU, but in relation to this coach in particular I know how much stock he places in having access to his entire squad throughout the season.  I appreciate this but I feel it is an unfortunate by-product of the way the European rugby calendar is put together and fixing that would be more beneficial to the game than making country of residence a deal-breaker in selecting a test squad.

Consider the recent case of Marty Moore - the evolution of the story was fascinating.  He’s going...hang on, Joe doesn’t want him to go...oh, wait, no, he’s going anyway.  Were we trying to change his mind at the eleventh hour simply because it wouldn’t have looked good for him to be selected to start in the very first Ireland match after he announces he’s leaving?  If so, that’s a much more worrying precedent than the one we’d be trying to avoid.

Obviously we’ll never know for sure what the motivations were, but my point is that perhaps we’re trying too hard to make the Irish bubble somehow immune to the realities of the modern world of professional rugby with its determined agents and deep-pocketed club chairmen/presidents.

Anyway...back to that Argentina game.  I know, it is probably best forgotten, but the fact remains it’s our last match before the 2016 Six Nations!  And if, like I suggest, you take the elite talent deprivation into account, it would be hard for any coach to avoid the temptation of a second chance to show that the plan Joe Schmidt & co had in place was one that would have worked with the right personnel.

This leads me to believe that despite all the calls for youngsters like Garry Ringrose and Stuart McCloskey to be brought into the setup right away, perhaps the team for this Sunday is going to be as close as Joe can get to the one he wanted to face Argentina.  Here is the kind of 23 I reckon he may put forward…

Obviously with Paul O’Connell no longer available and Peter O’Mahony still injured there is some scope for bringing in new faces and I reckon CJ Stander would be the perfect way to do this - he has been a leading light in some dark times for Munster and most definitely looks ready for the test stage.  Rory Best was always my choice as captain and will do a fine job...as for Paddy Jackson on the bench, as much as I am a Madigan fan, the Ulsterman has certainly shown better form of late.

And if the team has a similar shape, then so too of course must the game plan.  Many decry the use of the box kick but when you have someone as good at it as Conor Murray it would be a shame not to use it, though it probably wouldn’t hurt to have other options in the locker to keep the opposition honest.

I guess my point is that assuming our intention is to compete in this year’s Six Nations, and with a “three-peat” on the table that’s a decent assumption to make, I’m not so sure making sweeping changes to the way we have been doing things is the right way to go, particularly given that it comes with the implication that everything that went before was wrong.

Plus, we cannot ignore just how difficult our schedule is this year.  Wales are never afraid to come to Dublin and once we’re done with them we have just six days to prepare for Paris and after that it’s Twickenham.  As improved and all as the Scots may be, our last two matches being at home against them and Italy will appear a sanctuary by the time we reach that stage of the tournament but we simply cannot afford to think of crossing that bridge before we get there.

Not that I’m completely dismissing the necessity to blood new players, far from it.  It’s just that I reckon it would be better to feed them into the squad for the matches against the southern hemisphere.   The SANZAAR nations (I notice today they added an extra “A” for “Argentina”) represent the dragons we need to slay but it’s a job that can’t be considered done if we beat them now.  That will come in RWC2019 so if there are any matches this year we can “afford to lose” (as much as I hate the phrase) it’s those.

Predicting how this year’s test rugby is going to pan out is nigh-on impossible, as the variables are nigh-on infinite.  New coaches at England, France & South Africa, several retirees after the World Cup, Scotland on the rise.  And as for Wales, while they are definitely among the favourites for the 2016 Six Nations title, I can’t see the logic in assuming it has anything to do with it coming just after a RWC simply because that has happened in the past.

Still, uncertain as things may be, let us not forget that Irish rugby is still right up there in the mix of things on the world stage.  We have talent now, we have more coming through, and we have a quality coaching staff in place.  So it follows that we have every chance of competing in this Six Nations Championship, those beyond it, and RWC2019.  And let’s not forget there’s a decent chance we’ll be hosting the World Cup after that.

In other words, the future looks a lot brighter than some would choose to paint it.  It’s time to get behind them.  Come on you Boys in Green.  JLP


PS - Just as we’re posting this we see that the IRFU has been accepted into the World Rugby Raleri goggles trial, a story we have been following closely.  Bravo to all involved and it’s good news for the game in general and Ian McKinley in particular.