Start your day with five eye-catching egg-chasing quotes & links from around the ruggersphere.
#ThanksPaulie
They’re evening missing him in Nepal.
Not much more you can say. 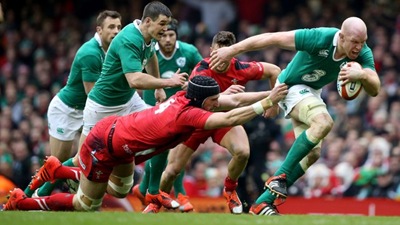 In an interview with RTÉ’s Michael Corcoran, he referenced his friend Felix Jones, forced to retire last year at the age of 28 following a neck injury, and said: “I consider myself very lucky on the whole.”
Retirement may see Paul O’Connell make an early return to the Munster fold
Noel Baker - Irish Examiner
“When he stood in the dressing room, with the players around him, he was a force of nature, a man who could get gel with an energy within a group of people to make things happen.”
Les Kiss hails Paul O’Connell as one of the greatest players he ever worked with
Michael Sadlier - Irish Times
O’Connell, a former four-handicapper, said that he was looking forward to dusting off his clubs. “I love playing golf, I literally haven’t played golf for three or four years for fear of getting injured.”
Paul O'Connell forced to retire from rugby after glittering career with Ireland
Tom Cary - Telegraph
"Some great battles over the years @Paul_OConnell all the best for the future !!" - Jamie Cudmore
Paul O'Connell's biggest nemesis has paid the Ireland legend a fitting tribute
Kevin McGillicuddy - SportsJOE.ie
He had intended to see out his career with French Top 14 giants Toulon but his injury has forced him to abandon those plans without having played a single game for them.
O’Connell retires
The Himalayan Times

Note - views expressed in "Front Five" links do not necessarily reflect those of HarpinOnRugby
at February 10, 2016