European Nations Cup 1A Round 3 preview 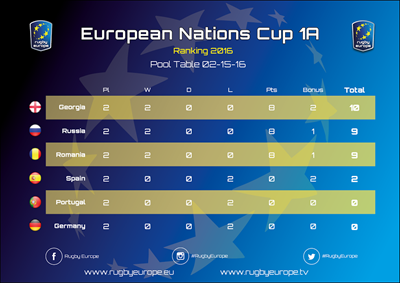 The European Nations Cup returns this weekend with its third round of matches, three exciting games all streamed live and free of charge on RugbyEurope.tv, the new digital streaming service from Rugby Europe, the governing body responsible for the promotion, development, administration and management of international competitions for the 48 member unions across Europe.

The pick of the days matches sees Russia travel to Romania for a crunch game in Iasi. With both sides unbeaten so far in 2016, this match is set to be a thrilling contest. The game could go a long way in determining the title aspirations for Russia and Romania. Both teams know that a victory on Saturday would put them in a great position ahead of their respective matches against title leaders Georgia in Rounds 4 and 5.

At the other end of the European Nations Cup table, Germany host Portugal in a critical match in the European Nations Cup relegation battle. With just four points separating the sides in the 2014-2016 standings, this crucial match will be a tense and gripping affair that will go a long way to determining which team loses their ENC 1A status for 2017.

Saturday also sees championship leaders Georgia take on a Spain side looking to bounce back from a narrow loss to Romania in Round 2. The result in Cluj puts Spain’s 2016 title chances in danger, but a win over the 2015 champions will bring them back into contention with winnable matches against Portugal and Germany still to play.

Georgia on the other hand come into this game fresh off an impressive second half comeback in Portugal that saw them score 29 points without reply. A win for Georgia will cement their title credentials with key matches against fellow contenders Russia and Romania in rounds 4 and 5.

The European Nations Cup (ENC) 1A 2016, takes place at the same time as the RBS 6 Nations Tournament. Organised across a two-year period, the ENC 1A will crown the European Champion, after the second leg running from 6th February until 19 March 2016.