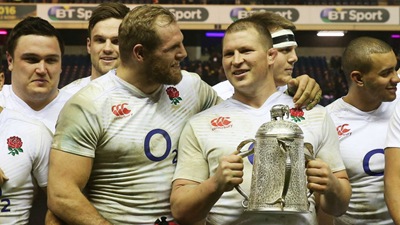 After a miserable performance in the 2015 Rugby World Cup, England need a good performance in this year’s Six Nations competition. New head coach Eddie Jones got off to a good start as England earned a hard fought 15-9 victory over Scotland at Murrayfield, however there is still plenty of work to be done if England are to win the tournament.

As of February 10th, England sit at the top of the Six Nations table. On the opening weekend, France struggled to victory over a depleted Italian side whilst both Ireland and Wales wasted opportunities in a 16-16 draw. This leaves Jones’ men in pole position to get their hands on a first Six Nations crown since 2011 – especially with home fixtures over both Wales and Ireland to come, however the Irish will fancy their chances of spoiling Jones’ party.

England will have to improve as the tournament goes on but Jones’ side showed enough passion and commitment to suggest they’ve turned over a new leaf – and the bookmakers agree. At the time of writing, England are now priced at 5/4 with Coral but Ireland also look well set to challenge for the crown. After all, if Schmidt’s side can win at Twickenham, they will be back in control of their own destiny.

Despite losing inspirational captain Paul O’Connell at the end of last year, Ireland have a very strong side and will attempt to control proceedings via the boot of Jonny Sexton. Earlier this week, Sexton’s wife gave birth to a new baby girl and Ireland fans will be hoping that this gives him the impetus to put in a great performance throughout the Six Nations before returning and committing some time to family life.

In the meantime, punters and union enthusiasts can keep up to date with the latest Six Nations news and all your sports betting needs in 2016 via Coral’s website. On their dedicated blog page, you can read up on the latest match previews, tips and general rugby news relating to your favourite teams. With a bit of luck, you may be reading an article on how Joe Schmidt masterminded yet another Six Nations victory come the end of the tournament.

Ultimately, it will come down to the England-Ireland clash on February 27th. It’s likely that the winner will go on to lift the Six Nations crown this season and a third consecutive success for Ireland would only help to assert their position as one of the best northern hemisphere nations in the 21st century. Will Ireland do it? Only time will tell but, with a bit of luck and a victory over Jones’ new-look England side, they could lift the title this year.