press release from the DerryFor2023 campaign 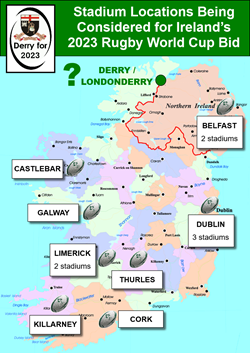 On the eve of this year's Six Nations Championship, a campaign has been launched to have Derry and the North-West included in Ireland's bid to host the 2023 Rugby World Cup.

The Rugby World Cup (RWC) is one of the biggest sporting events globally, delivering a huge financial and tourism boost to the nation that hosts it. The 2015 finals in England were estimated to have created almost £1billion of economic value and to have supported 41,000 jobs, both in the build up to and during the tournament.

Ireland is one of four nations bidding to host the 2023 finals - along with South Africa, France and Italy. The French and South Africans have held the tournament previously, whilst Italy is considered one of rugby’s weaker nations. All of which makes Ireland many people’s favourites to be awarded hosting rights.

The final decision on who will host the 2023 tournament won’t be taken until May 2017, but an initial proposal must be submitted by each bidding nation this coming June. And whilst a number of towns and cities around Ireland seem likely to be selected to host games in the Irish bid, Derry and the North-west have been completely overlooked.

Steve Bradley is spokesperson for the 'Derry For 2023' campaign. As a Derryman based in the rugby-mad city of Bath, he recently studied the impact of major sporting and cultural events as part of a Masters degree in Urban Regeneration. He is concerned that Derry and the North-West is about to miss out on the economic windfall that an Irish Rugby World Cup would bring. He commented "The biggest sporting event on the planet in 2023 will be the Rugby World Cup. If it comes to Ireland it will be the biggest spectacle ever staged here, providing global exposure to the towns and cities involved. Derry has everything needed to successfully host group games in the tournament. Yet we're being completely overlooked by those behind the bid".

Each bid to host the Rugby World Cup needs to identify 12 stadiums capable of holding matches in. With few rugby grounds in Ireland big enough, the GAA has agreed to make eight of its venues available. It is therefore expected that the Irish proposal will include three stadiums in Dublin, two each in Belfast and Limerick, and one each in Cork, Galway, Thurles, Killarney and Castlebar.

Mr Bradley added "Castlebar is a great town, but only has a population of 25,000. How would its infrastructure cope with a huge number of supporters, players, VIPs, sponsors and media for a global event ? And more importantly - if Dublin, Limerick and Belfast are all going to have more than one stadium included, why not switch one of those venues to Derry ? That way the north-west can be involved without anywhere else losing out".

"There are three simple reasons why Derry should be included : It would be good for Ireland's bid, good for the north-west region, and good for rugby.

"The North-west has a huge amount to offer Ireland's bid. Derry is the fourth biggest city on the island, with a unique tourism product. We've shown through the Fleadh, City of Culture, Clipper Race and the Halloween Festival that we can hold major events here. In Celtic Park we have a city-centre stadium with the potential to hold group-stage games, which would cost less to upgrade than some of the other GAA grounds proposed. And with the IRFU emphasising the cross-border nature of the Irish bid as a positive, adding Ireland's only cross-border regional capital would make perfect sense. Derry and the North-west belong in Ireland's Rugby World Cup bid, and it would be a weaker proposal without them".

"Secondly, it would have a real impact on the most economically disadvantaged city and region on the island. Derry has an unemployment rate of 10.3%, versus 6.1% in Northern Ireland and 8.8% in the Republic. A rugby world cup would do more for the economy and global profile of Derry and neighbouring counties than the City of Culture, All-Ireland Fleadh and Clipper races combined. And importantly, it would create an unmovable deadline to force the hand of authorities to finally complete long-overdue infrastructure projects in the region - like the A5, A6 and the railway".

"Thirdly - a Rugby World Cup in the north-west would be good for the game itself. Rugby is confined to a few geographical heartlands in Ireland, and unfortunately still perceived as a largely protestant and middle-class sport. Showcasing world class rugby in Derry would help alter that perception. It would literally be a game-changer for rugby in the north-west”.

The campaign is calling for every resident, politician, sports lover and business owner across the north-west - including Donegal, Fermanagh and Tyrone - to recognise the opportunity that the Rugby World Cup would bring to the region, and to support the call for Derry to be included.

Mr Bradley concluded "If the eyes of the sporting world are looking at Ireland in seven years time, we must ensure that Derry and the North-west won't be getting left in the shadows. Please back the campaign to include Derry in Ireland's Rugby World Cup bid. It's just too big an opportunity to watch slip by".

To find our more about the campaign and to add your support visit  www.DerryFor2023.com.