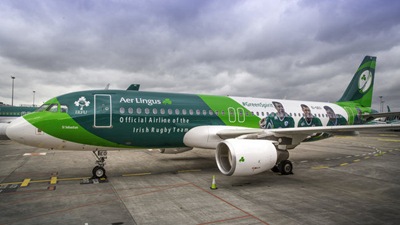 Whether it be at home at the Aviva Stadium or on their travels Ireland supporters are renowned for creating an electric atmosphere with their passionate support.  In the coming weeks Aer Lingus will be tapping into that support and helping fans create #HomeAdvantage wherever Ireland play.

‘The official airline of the Irish rugby team’ will be transporting thousands of supporters to Paris and London for the games against France and England.

#HomeAdvantage is the national airline’s campaign, backing their partnership with the IRFU, which will be rolled out over the next two months.  The campaign launched today with the first in a series of videos centring on the #HomeAdvantage: wherever we play theme.

The video reflects the bond between the fans and the team and role the supporters play in making any venue feel like a home game.  It shows the how the fans are willing to travel far and wide to give the Irish team a sense of #HomeAdvantage.

So too do the loyal fans including Gerry Gilligan from Clondalkin Rugby Club who appears in the opening frame of the video donning his ‘lucky socks’.  Ger is considered a ‘super fan’ as he has missed only five games since 1967!

In the coming weeks subsequent videos, which will be rolled out on Aer Lingus’ social media channels, will include  interviews with Ireland players Seán O’Brien, Donnacha Ryan and Jared Payne all talking about what exactly home advantage means to them.

Aer Lingus will also be helping fans to create that special atmosphere at airports around away match-days while Green Spirit, the aircraft specially decorated to back the IRFU partnership and showcasing images of the ambassadors, will be used to help fly supporters to the away games where they can get right behind the team.

Green Spirit will fly the Irish team to Paris and London for those away games.

Aer Lingus will be there at the Aviva Stadium on Sunday too where one lucky fan will win flights and match tickets to Paris for the France game allowing them to help bring #HomeAdvantage to the Stade de France.

#HomeAdvantage will be backed by media support including digital, social media, radio and a nationwide outdoor advertising campaign.

Aer Lingus is the Smart Choice for Ireland rugby supporters as they bring #HomeAdvantage wherever we play.