Thriller novel released based on rugby 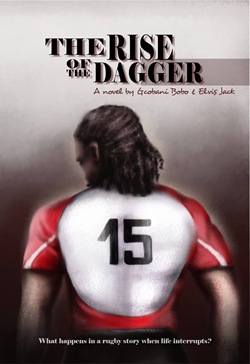 Former South African rugby player Gcobani Bobo and Elvis Jack bring you ‘The Rise of the Dagger’, a riveting novel unravelling the life of Xolile Dalindyebo. A sharp witted team player who goes out of his way to sharpen his team from the bottom up; any progress is still at the mercy of his mysterious past.

The book’s twists and turns promise to make it hard to put down. It gives a good glimpse of what goes on behind the professional sport and also caters good rugby dynamics for those interested to learn.

What Happens in a Rugby Story When Life Interrupts?

Xolile Dalindyebo comes out of nowhere to play rugby explosively. He is from the Eastern Cape, speaks Xhosa and, mysteriously, Japanese. His history is uncertain but the fans love him because he is, in effect, a black Christian Cullen – small yet very strong, electrifyingly fast with an intelligent side step and an instinct for the game.

He forms a long term business arrangement with Allison Meyer, a divorcee in her forties and maverick journalist. Together they construct his public persona carefully using twitter and other social media both to project his image and to protect his past.

As his popularity increases his role within the team grows stronger and he assumes the captaincy after some inner club manoeuvring.

In parallel with this, Xolile embarks on a series of reconnaissance visits to unlikely places to recruit extra players, a bit like the search for special skills in the Magnificent Seven film. He eventually recruits six additional players. With extra talent and a slew of new tactics on the field, this could finally be the year of the Lions…

But nothing is as it seems in the world of rugby and Xolile’s past may still return to haunt him and the team….

Gcobani Bobo played professional rugby for 15 years for a number of local and foreign teams, including the Springboks (the South African national side), Lions, Cats, Sharks, Western Province, Stormers and the Newcastle Falcons in England. He currently coaches and commentates on rugby. Elvis Jack is the author of a number of books.

The book is available on Amazon, iBookstore and Kobo.co.za.